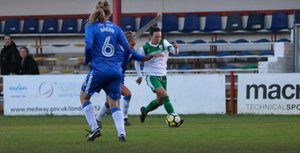 Three goals in six minutes saw Chichester finally ended their recent winless drought with a convincing 4-0 victory over Gillingham that saw them rise to sixth in the Premier League Southern Division.

In a gritty opening 45 only Hollie Wride’s goal was the difference between the two sides albeit a dominant performance by the visitors.

Second-half and Chichester kicked into gear with a flurry of goals after the 70th minute; Jade Widdows from a free-kick, a cross come shot from Laura Ingram and Jess Lewry from a few yards out.

Only the change for Matt Wright’s side with Wride returning the starting line-up after her brace against Cardiff City.

Chichester made a bright start and after only five minutes the pace of Cherelle Khassall caused havoc at the back for the hosts.

Khassall fired a shot on target only for goalkeeper, Courtney Shanly, to make a good save to deny her.

The visitors continued to press and approaching the quarter hour mark Wride had an excellent chance to break the deadlock.

A ball was sung in from then left and, somehow, the home defence managed to all miss the flight of the cross where it duly arrived at the feet of Wride who on the turn fired a stinging shot just over the bar.

Chichester made life difficult for the Gills but Kallie Balfour was a danger for the Blues her height and swift pace saw City’s defence having to back pedal at times.

Five minutes from the break the deadlock was broken.

A Lauren Cheshire corner was poorly dealt with by Gillingham with the ball finding Wride on the edge of the box, she controlled the ball onto her left foot sending the ball flying with a scorching effort into the top corner beating Shanly.

Chichester pushed forward from the restart and, inside the first minute, Emily Symonds was unlucky to concede a penalty to the visitors.

Wride took on the duties but, despite wrong footing Shanly, sent her effort high and wide.

Chichester didn’t worry though and just past the 70 minute mark the goals started flowing.

The ever improving Widdows from a free kick from 30-yards out found the top corner to double the visitors lead in extraordinary style.

Next was left-back Ingram broke clear down the left and whipped in a cross come shot that eluded everyone in the box, Lewry was there looking for goal although missed but it didn’t matter as the ball sailed into the bottom corner sparking jubilant celebrations.

Completing the goal flurry in the 77th minute was Lewry.

Lewry battled through and was not going to allow any defenders to prevent her from getting her goal.

The midfielder thumped the ball into the roof of the net to seal the win in emphatic style.

While Gillingham found ground in the Chichester half they didn’t give Sadie Wilson-Blakely much to do and the visitors saw the game out.

The smiles were broad and wide at the final whistle knowing three points were being taken home to Oaklands Park with an important clean sheet as well.

Up next is the visit of C & K Basildon in the SSE Women’s FA Cup Second Round at Oaklands, kick-off 1pm but the fun begins at midday with plenty of festive cheer, games and food.