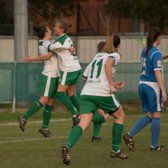 Goals from Emma Alexandre and Cherelle Khassal in extra-time booked Chichester City Ladies a place in the Third Round of the SSE Women’s FA Cup as they won 4-2 against C & K Basildon in an absorbing game at Oaklands.

Jess Lewry put Chichester ahead in the sixth minute before the visitors were reduced to 10 with Amy Nash seeing red for kicking out during a heated moment, despite the player advantage Basildon took the lead into half-time.

Zoe Rushen converted a penalty and Therese Addison also netted the hosts did find an equaliser in the second-half through Jade Widdows to send the game to extra-time. Jess Lewry was sent off for a second bookable offence.

Two goals in the first 15 minutes of extra-time were enough to send Chichester through, Alexandre put the hosts ahead with a stunning header before Khassal sealed the win.

Chichester were the underdogs going into the tie with C & K Basildon sitting 2nd in the FA Women’s Premier League South and their manager Steve Tilson having just been awarded Manager of the Month for November.

Matt Wright’s side went into the game with their confidence high following the convincing 4-0 win over Gillingham in the previous match and with only one change being made to the line-up, Alex Collinghan starting.

It didn’t take long for the hosts to send their fans delirous by taking an early lead through the predatory instincts of Lewry.

Six minutes were on the clock when Khassal broke clear to the right of the area and played a perfect ball across to the unmarked Lewry who side footed the ball passed the outstretched hand of goalkeeper, Nikita Runnacles, and into the bottom corner.

Basildon needed to find a response but made the game harder for themselves when Amy Nash needlessly got involved in a fiery moment and was shown red by referee, Chris White, reducing the visitors to ten.

However, Basildon picked up the pace, dominated possession and it wasn’t that long before the visitors turned that pressure into an equaliser.

Therese Addison was brought down inside the box before skipper, Zoe Rushen, converted a penalty to level the affair.

Chichester were now looking a shell of their former selves from earlier on and the pace of the Blues was a constant cause for concern.

Close to the break the visitors got their noses in front for the first time when Addison rounded off a move sending the ball into the roof of the net from all of 12-yards giving Basildon the advantage into the break.

Despite the half-time score line there were plenty of smiles around Oaklands Park with the Christmas music bellowing out the tannoy, Santa and Rudolph facing off in a dizzy penalty showdown and the younger fans enjoying the “snow”.

An improved second-half performance was needed for Chichester who needed at least two goals to best the 10 of Basildon to make the draw for the Third Round of the FA Cup.

50 minutes played and Widdows found an equaliser albeit an error from the Basildon keeper.

The ball found its way to the strikers’ feet and she let fly with a low effort on goal, Runnacles seemed to have the effort covered but it took a huge bobble right in front of her with the ball hitting her arm to travel up and back into the goal.

Equaliser for the hosts and the cup dream was back on until just past the hour mark the referee deemed Lewry to have made a bookable foul – despite protests around the ground – and gave her, her marching orders for a second yellow card.

Chichester made two changes during the second-half Jenna Fowlie coming on for the 16-year-old Collinghan and Chloe Tucker came on late in the game for Rebecca Barron as the clock ticked down.

Extra-time came although Chichester fought to find a winner in normal time there was another change for the host’s with Chloe Dowdell, making her return to the squad, came on during the first period pressing well to force a corner on the right hand side.

Lauren Cheshire swung in the corner and Alexandre soared into the air to smash home a firm header to put the Green Army back in front for the first time since Lewry’s opener, cue scenes of jubilation.

There were scenes again minutes late when Khassal pounced on an a slip by Runnacles allowed the Irish International to intercept round the keeper and slot home the fourth goal.

15 minutes still to go and Chichester managed the game. Basildon searched for a sniff of a goal to keep their FA Cup dreams alive but the home defence held on.

Khassal with some quick, neat feet kept the ball in the Basildon half as the referee blew the final whistle with Chichester going into the draw for the Third Round.

Up next Chichester meet Gillingham for the second time in two weeks this time at Oaklands Park next Sunday, December 10th and the Green Army have been handed another home tie in the cup.

Luton Town will visit the south coast on January 7th the first game of 2018.