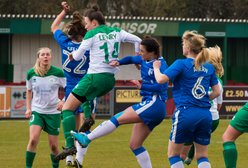 Lewry heads Chichester back to winning ways at Nyewood Lane’

Jess Lewry’s 61st-minute header was enough for Chichester City to take the points against Gillingham at home.

It was honours even in the first-half with the visitors enjoying most of the efforts at goal but struggling to get past an in form of Sadie Blakely.

A double substitution at half-time saw a positive change to proceedings and substitute Lewry smashed home a header from a Laura Ingram corner.

Matt Wright made a couple of changes to his squad from the defeat at West Ham, Jade Widdows and Lewry returned from a spell on the sidelines and Alice Walford made her full senior debut.

It was a quiet start to the match with chances lacking for both sides.

Sophie Phelps looked strong at the back for Chichester and would prove to be a nuisance for Kallie Balfour and Gillingham all afternoon.

Alex Collighan was in the right place at the right time to put in a great clearance to deny Courtney Gibson a golden chance on goal as the visitors continued to threaten to break the deadlock.

Approaching the half-hour Tiffany Taylor had a half chance for City when the ball was played all the way back to the keeper, Courtney Shanly, who just managed to beat the defender to the ball.

Next up Sadie Blakely made a stunning save to deny Kallie Balfour and then unleashed the hosts on a quick break.

However, despite Lauren Cheshire putting Natasha Stephens clear an offside flag halted progression and the blues were able to regroup and come at Chichester once more.

Balfour was then left dejected as she missed two chances to put the Gills ahead; her first effort blocked by Blakely with the rebound finding the striker who blazed the ball over.

A tactical change at half-time with Ellis Bloomfield and Lewry replacing Taylor and Walford with Chichester still very much in the game.

The second-half started positively for the home side with Cheshire and Stephens both having opportunities to score.

With 61 minutes on the clock, a goal was finally found in the game.

Lewry was the one to apply the moment of quality, powering a header home from Ingram’s perfectly placed corner to put the green army in front.

A heart-stopping moment came with seven minutes of normal time left with the Gillingham narrowly missing out on an equaliser through Gibson.

Her rocket shot smashed onto the underside of the bar but somehow stayed out and Cheshire made the clearance to keep Chichester in front.

It was a nervy end to proceedings with Gillingham carving out a few half chances but City held their own.

Deep into injury-time Collighan had a chance to seal the win and did well to take her chance despite the defenders either side of her but the effort lacked power.

It was a chance that was not to be rued for Chichester with the full-time whistle being blown and a first league win of 2018.