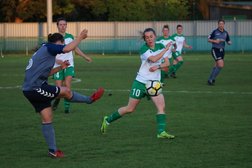 Title challengers Charlton cruised to victory at Oaklands as the injuries continue to pile up.

It was a night to forget as Charlton Athletic powered to a 6-0 win at Oaklands Park against Chichester City who saw two players come off injured.

Charlton scored four in the first-half including a brace from Charley Clifford as Chichester struggled to get a hold of the game.

There was an improvement second-half but goals for Charlotte Gurr and Kit Graham sent the Addicks top of the league.

There was a reprieve for Matt Wright heading into the match with Sadie Blakely and Jenna Fowlie returning to the squad with Cherelle Khassal also back albeit on the bench.

Charlton were quick off the mark Griffin and Graham causing trouble early but were denied by a determined Chichester defence.

Alex Collighan looked eager to impress against the title chasers and drilled a cross into the box but Jess Lewry found it too high to head in.

Charlton broke the deadlock with seven minutes on the clock through Pepper straight from the corner despite Blakely’s best efforts to clear on the line.

16 minutes in and Charlton had a second with Graham pulling the ball for Clifford in the box to fire home.

Albeit 2-0 down City worked well to get the ball down and pass it around through the midfield to the attacking trio of Lewry, Collighan and Natasha Stephens.

There were several half efforts for the hosts, but Katie Startup remained relatively untroubled in the Charlton goal.

In the 26th minute, there was more misery for Chichester with two goals in two minutes would see the hosts head into half-time 4-0 down.

Clifford smashed home her second of the game with a great run in behind the defence and teenager Georgia Griffin finished a neat move in the area.

A half-time substitution saw Cherelle Khassal replace an injured Rebecca Barron and the Irish striker was keen from the restart to make a difference.

Khassal almost got Chichester back into the match straight from the recent her effort blocked by Startup.

In the 51st minute Charlton were denied twice the first by Blakely and then Tiffany Taylor did enough to deflect Graham’s rebounded effort.

Just past the hour mark and a fifth goal of the game came, again to the visitors, Gurr firing home on Graham’s through ball.

Two minutes later and Graham added a goal to her two assists a low driven effort from the edge of the 18-yard box making it 6-0 with less than 30 minutes to go.

The scoreline was beyond City but the determination to get something from the game was still there with Cheshire trying to rally the team in the absence of captain Emma Alexandre.

The injury list continued to mount for Chichester on Wednesday, Taylor had to be stretchered off in the final ten minutes after she flew in to block a Graham shot meaning City finished the game with 10-players.

Collighan went close to a consolation goal for City but her header was cleared by Charlton following build-up through Cheshire and Stephens.

The final whistle came for Chichester no injury-time played, a difficult night against a side pushing for promotion and semi-professional status.

Up next Chichester City host a Queens Park Rangers side that last time were thrashed 11-0 against Charlton. Game to be played at Oaklands Park on Sunday, May 6th.