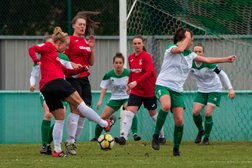 REPORT | Frustrating afternoon as Coventry do the double

A physical Coventry hit Chichester for three with Alexandre set to miss rest of the season.

A second defeat to Coventry United in the space of two weeks left Chichester City in 8th place with four games to go.

Lois Jefferies opened the scoring in the first-half tapping home a rebounded effort with Amber Hughes doubling the lead minutes after half-time.

Marie Gauntlett sealed the win in the 66th minute with a neat chip over Poppy Shine.

Captain Emma Alexandre had to be stretchered off in the first-half due to a knee injury and looks set to miss the remaining games this term.

There were changes made again this week for Chichester with Laura Ingram, Tiffany Taylor and Rebecca Barron returning to the starting line-up with captain Emma Alexandre starting in an unfamiliar centre midfield role.

It was a chilly afternoon at Oaklands despite May being two days away and both sides took a few minutes to settle into the game with neither side really testing the goalkeepers.

Coventry had the advantages earlier on as they enjoyed the possession, but Chichester grew into the game with Alexandre looking more and more comfortable in midfield.

The skipper looked to set up the attackers twice; once with Natasha Stephens who was forced to take a throw-in and then to the lone striker Jess Lewry who was caught just offside.

With 20 minutes on the clock, there was a blow to the home side with Alexandre dropping to the ground in pain, after several minutes of treatment the captain was stretchered off and taken to the hospital.

The young Ellis Bloomfield took her place and Lauren Cheshire assumed the captain’s role as Alexandre went to the hospital.

In the 32nd minute, Coventry had the opening goal having just smashed the crossbar minutes prior.

Taylor was racing back to prevent a United goal with Shine racing out to join the defender the ball rebounded out to Jefferies who tapped home the opener.

Three minutes later and Coventry nearly had a third if not for Barron’s quick reaction to smash the ball off the line.

Right before half-time, Lewry had the best opportunity to score for Chichester when she was played onside the ball over the top, but the striker couldn’t find the pace to beat Susan Wood to the ball.

Two minutes from the restart and the score was doubled by United, Hughes the scorer turning inside the box to slip the ball into the net.

There was a chance for Chichester from an Ingram free-kick that floated over everyone towards Lewry but Wood remained untested.

66 minutes on the clock and a third goal was found by the visitors, Gauntlett on the 8-yard box neatly chips Shine sealing the win with 24 minutes remaining.

Shine had to be alert moments later as she reacted quickly to deny a fourth as she tipped the ball over the crossbar.

Into the final ten minutes and Stephens had a great chance to reduce the deficit but couldn’t find the touch to score from Lewry’s through ball.

Despite their best efforts, Chichester couldn’t find a late goal as the referee blew the full-time whistle.

Next up for Chichester is two more home games the first is title chasers Charlton Athletic on Wednesday, May 2nd followed by Queens Park Rangers on Sunday May 6th.