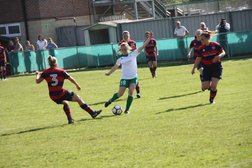 Chichester City jumped up into 7th with a convincing 3-0 win over Queens Park Rangers in the FA Women’s Premier League on Sunday.

After a delayed kick-off the home started strongest but couldn’t find the opener until the 60th minute a Laura Ingram header beating Lauren Dolbear after she saved a Natasha Stephens penalty.

Chichester grew from there grabbing two more goals through Jess Lewry and a stunning curled effort from 17-year-old Alex Collighan.

Tiffany Taylor missed out following the injury to her ankle against Charlton Athletic in midweek, but Gracie White and Ellis Bloomfield were rewarded with starting places while Jade Widdows also returning the starting-11.

City were on QPR’s toes from the off keeping the intensity and pressure high as the team looked to get over the recent defeats to Charlton and Coventry United.

Chloe Tucker and Widdows both had efforts in front of goal in the opening exchanges but couldn’t get the ball on target.

Set pieces were shared around but Lauren Cheshire was the main provider and nearly saw her corner ball headed in by Sophie Phelps if not for a quick-thinking QPR defender on the goalline.

There were more attempts for Chi just missing the goal for Bloomfield and Laura Ingram while Widdows was unlucky not to convert just two-yards out at the near post.

QPR did eventually break into the Chichester half their efforts off target and only really troubling Sadie Blakely once who made a great block.

Collighan thought she had a goal just before half-time but not for the referee’s whistle as she was adjudged to have knocked the ball out of the hands off the QPR goalkeeper, Dolbear.

The dominance continued into the second-half with QPR rarely troubling the Chichester back line or the goal.

Stephens had an ideal chance to break the deadlock and score her first goal for the club when she was brought down inside the box.

The winger set her target and put a good foot behind the ball but Dolbear chose the right way to deny the former Portsmouth player a goal.

A goal finally came for Chichester on the hour defender Ingram powered home a Cheshire corner to the delight of the home crowd.

There was no let of now for QPR with the hosts keeping up the pressure and Lewry went one-on-one with the keeper but was denied a chance to take it around her for a second goal.

For all her efforts today Lewry got her goal in the 73rd minute the loose ball falling to her on the edge of the area for a well-placed, low shot beating defender and keeper on the line.

The result was settled, but Chichester kept up the tempo despite QPR shooting from 35-yards out which was easily collected by Blakely.

With just minutes left on the clock, Collighan curled a stunning shot which Dolbear got a hand to but could only aid the ball into the net.

Full-time and a terrific victory for Chichester which also saw the team keep a clean sheet and move above West Ham United into 7th.