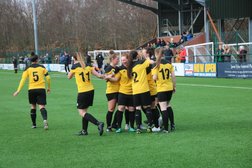 Jess Lewry and Sadie Wilson-Blakely were penalty heroes as Chichester City won 5-4 after The New Saints held them to a 1-1 draw.

Kim Bebbington scored the opener for the hosts but Cherelle Khassal nullified that in the second-half.

There were no goals in extra-time but the Green Army lost captain Emma Alexandre to a head injury as they faced penalties.

It was neck and neck until the fifth round, Emily Ridge’s was saved by Wilson-Blakely which was followed up by Lewry who smashed the roof of the goal and sent Chi into the fifth round.

The visitors started brightly with the likes of Cherelle Khassal and Jade Widdows looking dangerous using their pace to cause concern at the back for TNS.

TNS striker Emily Ridge was always likely to be a threat for the hosts but the Chichester defence were more than a match for her.

Frustration seemed to be the name of the game for the hosts and to play counter-attacking football but chances were few and far between for TNS.

Jess Lewry then had a close shave for Chichester following good work from Khassal.

This time Lewry fired a volley goalwards and was left frustrated as the effort grazed the crossbar and went safe.

Next, the green hoops sprang forward and, for once, Chichester got a little fraught at the back and two chances came for the hosts in quick succession before Lauren Cheshire finally cleared the danger for the visitors.

Chichester continued to probe away and Lewry went close again with a diving header from a Fowlie cross.

As the visitors continued to threaten to break the deadlock but, close to the interval the hosts were to take a huge slice of fortune to break through themselves.

A long ball was sent towards the Chichester area where keeper, Wilson-Blakely and defender Cheshire looked to have things covered but the ever-hovering Bebbington managed to get a faint touch between them.

This sent the ball goalwards and, agonizingly for Chichester, into the back of the net to a huge roar from the home support in the stands.

In the last minute of the half, Tiffany Taylor narrowly missed out on an equaliser when latching onto a Widdows free-kick but her touch went across goal and was eventually cleared.

Shortly after half-time, the visitors were back on the level terms.

This time Khassal danced her way past several defenders to surge into the box opened her body to sidefoot her shot into the far corner.

Next Khassal was sent soaring through by Chloe Tucker but Garnham did excellently to deny her a second strike to keep the New Saints on level terms.

Alex Collighan was also growing as a threat down the flank for Chichester, as the game wore on, and her pace and movement was further energizing the visitors’ attacks with chances getting ever more as the half wore on.

Lewry thought she was through on goal from a lovely pass from Collighan but an offside flag halted her in her tracks leaving her frustrated at the opportunity going begging.

Late on Chichester went close again with three quick-fire attempts, two fell to Khassal and the other for Lewry.

Garnham was having a sensational game between the sticks for the New Saints as was the main reason that the hosts were still in the tie.

Neither side could find a winner as the game went to extra-time.

There were plenty of chances in the 30 minutes but neither side found that inch but there was a blow to the affair as the game was suspended when Emma Alexandre went down from a clash of heads.

The skipper was stretchered off and the game resumed after a 35-minute delay. No goals were found so the game went to penalties.

Jade Widdows, Tucker, Cheshire and Rebecca Barron all converted for the visitors but the final, regulation, kick taken by Ridge.

Her effort was at a great height for the goalkeeper and it was a super save by Wilson-Blakely.

This left one penalty left which would send the game to sudden death or Chichester into the next round, up stepped Lewry.

Speak to her after the game she’ll tell you she hates penalties and expected it to be over by then but none of that showed.

Lewry stepped forward, saw her spot and found it sending the ball into the roof of the net sparking glorious celebrations from the players on the half-way line, the bench and from the travelling Green Army.

Chichester were through to the next round and made history.