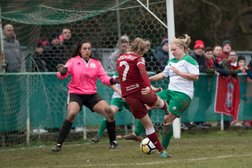 Wilson-Blakely shines on a record-breaking day for Chichester

A record crowd of 1,300 saw Chichester City Ladies bow out of the SSE Women's FA Cup following a 3-0 loss to Liverpool Ladies.

Despite holding the Reds for the opening 30 minutes it was the Women's Super League side who took the lead, two goals from Rinsola Babajide and Ashley Hodson in the first-half.

Second-half started badly as Liverpool got a third through inform Bethany England but Chichester's defence held firm but the team couldn't find a goal for all their efforts.

Over a 1,000-people descended onto Oaklands Park on Sunday as Chichester played their biggest match in recent history with a place in the FA Cup quarter-finals up for grabs.

Matt Wright made a couple of changes to his line-up from The New Saints game; Sophie Phelps made her full-debut with captain Emma Alexandre side-lined, Laura Ingram returned following an injury and new signing Chloe Melton also made her debut.

The hosts started positive, playing neat football despite the heavy and difficult playing surface, the Reds took their time to adjust to the unfamiliar environment.

Sophie Phelps had a half chance in the fifth minute to score from Chloe Tucker's deep free-kick but the defender's volley sent the ball over.

Jess Lewry had a golden chance from a stunning cross by Melton on the right but the Merseyside keeper, Emily Ramsey, made an excellent save to deny her albeit to the offside flag as well.

Minutes later Liverpool found the break and England was one-on-one with Sadie Wilson-Blakely who held her own diving low to prevent the threat of the on-loan Chelsea striker.

Caroline Weir had a chance for the Reds but excellent defending from several players blocking her effort at goal before Lewry was caught offside again in front of goal following a series of great movement for Chi.

After 32 minutes the gap was found for the visitors.

Their latest signing, Babajide, broke through the backline to calmly poke the ball past Wilson-Blakely for the opener.

Six minutes later and the lead was double through Hodson.

It was a slice of fortune for Hodgson who benefitted from a moment's hesitation between goalkeeper and defender with the midfielder in the thick of it too as she got a toe on the ball to bag herself a goal.

Tiffany Taylor made a great block to deny Liverpool a third before the break and Wright would have hoped for stronger start for his side after the restart.

Three minutes into the second-half and the Reds got their third through England.

Wilson-Blakely made a great save to deny Liverpool at first but the ever-threatening striker had the time to side-foot in the rebound.

Liverpool continued to press, but the catlike instincts of Wilson-Blakely kept them at bay on several occasions.

Chances were few and far between for the hosts, but the reds defence were like a brick wall at times with no way through for the host's strikers to challenge the Liverpool goal.

Former Yeovil winger, Melton, was a major part of the probing attacks for Chichester her wicked pace and neat feet giving the Red defence something to think about.

The full-time whistle blew and Chichester's first defeat of 2018 see's the bow out of the FA Cup in the last 16.

There will be positives to take from the game for the side who are two leagues below their WSL1 opposition and on the day keeper Wilson-Blakely picked up the player of the match award.

UP NEXT: Chichester travel away to West Ham United in the FA Women's Premier League Southern Division on Sunday, March 11th.