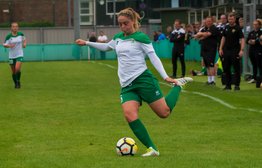 Sara Tubby and Molly Clark got the goals as Chi start the season off with a win.

It was a day for the debuts with Sara Tubby and Molly Clark scoring either side of half-time as Chichester City beat Oxford United 2-1.

Tubby headed home her first goal in the first-half with Chi just edging the game into the break.

Oxford had chances, but Clark made it two putting the ball into the top corner before Ellie Noble got a late goal back.

It was an even start for both teams M.Clark had the opening shot of the game but fired well over before Oxford enjoyed a couple of half chances.

Tubby looked up for the game from the first whistle running in and around the defence causing the visitors to think a little.

The returning Hollie Wride found herself with a chance being set up by M.Clark but couldn’t trouble Lucy Thomas in goal.

There was end to end moments with Oxford breaking and hitting the woodwork before Chichester break with Stephens in a great area who had to settle for a corner.

30 minutes on the clock and Tubby was always threatening.

The striker causing problems for the Oxford backline as she continued to beat them but just missing out on a good chance to score thanks to excellent defending from the visitors.

Nine minutes from the break and the deadlock was broken with a debut goal from the former Brighton & Hove Albion Development player Tubby.

Tash Stephens the provider with a great cross as Tubby rose the highest to head the ball through the goalkeeper’s hands.

The second-half started much the way the first-half did with both teams attacking strong.

Chichester had the better chance from M.Clark her ball over the defence finding Tubby who’s touch is blocked by Thomas but the keeper takes out the player before she could hit the rebound.

It could have easily been a hat-trick day for Tubby but United seemed determined to keep the striker down to one as Thomas and her defence blocked Tubby out twice.

Making her second full debut for City it was a M.Clark spectacular 25-yards out from the side of the pitch she drilled the ball into the top corner beating Thomas.

Jess Lewry and Tucker went close to putting the game to bed but found Stephanie Bent in their way, the latter’s effort cleared off the line.

Noble reduced the goal deficit to just one with eight minutes remaining curling a free-kick round the wall and in.

The goal didn’t disrupt City who pushed on for a third and to manage the game and Lewry had the best chance of the game deep into injury time but could only shoot straight at the keeper.