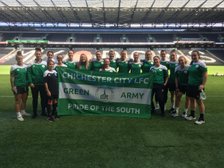 Chichester left it late to take all three points against a resilient Milton Keynes Dons side thanks to an 86th-minute goal.

From the get-go Chichester caused problems for the hosts but couldn’t convert from a plethora of chances.

Sophie Shults made a series of saves to keep her side in the game but with four minutes of normal time left Clark struck from 30-yards out to beat the goalkeeper.

Leah Littlechild had the opening chance of the game sending a low effort across goal that beat Lauren Dolbear but grazed the back post.

It was in the final third that Chichester lacked in the opening exchanges with Clark and Stephens both unable to turn in following two great balls into the box.

Clark did scrap the crossbar after some great control from Helen Ogle before smashing a shot from 20-yards out that Shults claimed.

The former Portsmouth midfielder was the danger player and her long-range efforts were testing Shults in the MK goal and had to parry an effort at the back post.

It wasn’t all Chi with the hosts finding their feed on the counter and ex-Lewes pair Tammy Waine and Lauren Dolbear working well to stop Hev McDonnell who was played clear through.

Stephens should have scored on the stroke of half-time well Widdows played her through on goal, but Mollie Burgess and Leanna Doyle recovered to block.

Sara Tubby replaced Sharna Capel-Watson at half-time and the striker had a glorious chance to open the scoring with a header that Shults parried over.

The ex-Brighton player was then denied twice in front of goal as Milton Keynes then looked to counter but couldn’t get past Ogle who had raced back into defence.

Laura Ingram replaced Widdows and had a great impact heading clear a Dons free-kick before the defender linked up with Ogle to create a chance that was well caught in the box.

Leah Cudone was caught offside on a rare attack for the hosts with Taylor recovering well to deny before the whistle blew.

Into the final 10 minutes, Chi didn’t take their foot off the gas, Clark had a 40-yard strike saved, Stephens headed over and Tubby struck the post when she put the ball between the keeper's legs.

The goal finally came in the 86th minute from a short corner played to Molly Clark from 30-yards on the near touchline that floated in at the back post.