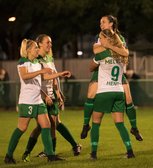 Chloe Melton made it three goals in three games as Chichester City won 2-1 in the FA Women’s National League against Portsmouth.

It was Hollie Wride who put Chichester in front with a looping ball from the side-lines that beat Robyn Levett on her line.

Melton doubled the advantage in the second-half before Daisy McLachlan smashed in a solitary goal for the Blues that wasn’t enough to dent City’s perfect start.

Lucie Challen made a starting return to the Chichester side having spent a year out with injury she was one of four changes from the team that beat Milton Keynes Dons 1-0 at the weekend.

The tempo was high from the off but both teams took a few minutes to find their feet and it was the visitors who had the first shot at goal.

Rachel Panting was the liveliest from kick-off as she raced down the wing beating two defenders before crossing to the back post for Hannah Geer whose effort lacked the power to beat Lauren Dolbear.

It was an early goal for Chi, albeit not a quick as in the League Cup, as with 12 minutes played Hollie Wride got her first goal of the season.

Wride played a short corner with Molly Clark who set for the midfielder to curl a beautiful shot into the goal beating a fully stretched Levett.

The goal gave Chichester confidence in front of a great home crowd of 272 with Pompey making key blocks to deny Clark and Melton the chance to double the lead.

There were half chances for the visitors Panting tried to make a through ball however Tammy Waine and Tiffany Taylor covered well before Katie James tried an overhead kick but completely missed the ball.

Pompey tried to make gains in the Chichester half but couldn’t get through to really test Dolbear even a well struck 30-yard effort from McLachlan was seen over for a goal-kick.

Sara Tubby recreated her chance she had at Stadium MK as she headed a Melton cross towards the Pompey goal that was excellently saved by Levett.

Melton bagged her third goal of the season and against the Blues as she reacted quick to Levett’s spilled save off of Clark’s shot the winger beating the keeper and defender to tap into an empty net.

The two-goal advantage lasted six minutes though as Danielle Rowe played McLachlan through on goal to lob Dolbear before Waine could put the tackle in.

Just past the hour mark and Chi believed they had got a third when Clark hooked the ball over the Pompey backline with Cherelle Khassal and Melton chasing.

It’s Melton takes the shot as the ball bounces dinking it over Levett who was well off her line, but the assistant referee had flagged for offside and the goal didn’t stand.

Despite the disallowed goal Chichester kept working hard as Khassal was narrowly beaten to the ball by Levett and Melton had a cross blocked by Geer.

Melton had another shot blocked by the Pompey skipper, Amelia Southgate, which fell to Wride who set up Stephens for a bicycle kick that fell short of the goal.

The former Pompey winger, Stephens, might being kicking herself after the game with several chances to put the game to bed fell but not for some strong defending by the visitors.

There was a call for a penalty late on for the Blues, but the referee disagreed with his assistant as Taylor tackled Albuery on the edge of the box and Chi cleared their lines.

After several minutes of added time, the final whistle came, and Chichester made it four wins in four in the league to remain top of the National League Southern Premier Division.