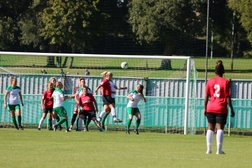 REPORT | Chi edged out in physical top of the table clash

Jade Brook’s brace was enough to push Chichester City off the top spot in a 2-1 defeat at Oaklands Park in the FA Women’s National League Southern Premier.

There were two quick goals in the first-half with Brook scoring the opener before Khassal made it honours even two minutes later.

The two sides cancelled each other out in the physical battles but Brook found the winner with a lobbed effort.

First met second place at Oaklands Park with neither side having lost a game in the first four league fixtures.

Aaron Smith made two changes to his team that beat Portsmouth midweek as Helen Ogle and Jade Widdows started.

There were chances in the opening foray for both sides Khassal and Melton putting their efforts wide and Marie Gauntlett also saw her chance sail over the goal.

It was the visitors who took the lead in the 8th minute from a free-kick that sailed towards the back post where Brook was able to get a touch that Lauren Dolbear was unlucky not to parry.

The lead didn’t last much past the restart as Widdows broke into the box and set up Khassal for a lovely back flick goal.

Both sides looked lively and Chichester had a series of chances with Tiffany Taylor and Widdows unlucky not to score from headers.

Dolbear was quickly called into action parrying a volleyed effort from a Coventry corner.

Widdows missed another header before Hollie Wride smashed the ball at goal forcing Susan Wood into a fingertip save.

The game was end to end meaning both defences needed to be alert and Taylor forced a Coventry shot into the side netting.

Deep into injury time Chi nearly found a goal to put them ahead at the break with Khassal in the eight-yard box but Wood and her defender do enough to block and smother.

Into the second-half and Coventry looked the brighter although Clark struck a lovely shot only to see it claimed by Wood.

Dolbear was kept busy and had to claim several Coventry crosses.

The ascendancy changed to the visitors as Dolbear made a great save from a shot on the edge of the area before Gauntlett dragged a shot wide.

Coventry’s pressure came off in the end as Brook raced through on goal and lobbed the ball over Dolbear for her second of the afternoon.

It was far from over as Chi searched for an equaliser no one got on the end a great Clark free-kick before Stephens saw her shot graze the post.

The game was scrappy at times and saw a number of fouls, free-kick and yellow cards as Chi continued to search for an equaliser.

The clock ticked down and the chances went by for Chi with the final whistle blowing on the first defeat of the season.