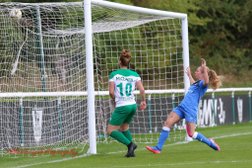 REPORT | Chi bounce back with win at Loughborough

One goal was all Chichester City needed to take home all three points with a win over Loughborough Foxes in the Women’s National League Southern Premier.

Both goalkeepers made vital saves to keep the scores level at half-time including a goal-line save by the Loughborough keeper to deny Gemma Simmonds a goal.

Despite the distance between the two sides, with Loughborough originally planned to play in the Northern Premier, it was the visitors who came out the blocks the quickest.

M.Clark struck the crossbar within minutes of the start of the match and Widdows saw her header blocked by Amy Burle for the Foxes.

It was an end to end game, that kept both keepers busy.

Cherelle Khassal forced a great save from Burle before Lauren Dolbear was called into action as Loughborough counted the keeper at full stretch to protecting her bottom corner.

Save of game went to Burle who was caught off her line by Simmonds who lofted a shot from 30-yards out towards goal, the keeper raced back with her eyes on the ball and managed to block the ball on the line denying the opener.

Dolbear was called into action again this time blocking with her legs before the captain Lauren Cheshire made a crucial challenge that saw Chi go on the counter.

M.Clark was the driving force of the counter and picked out Khassal just inside the box who controlled the ball to strike on the half-volley that found a Loughborough defender in her way.

It was a stalemate at half-time with both teams pushing the other and trying to gain control of the match, Simmonds’ effort still the closest to a goal.

A team talk was needed and Chi hit the ground running as M.Clark popped up for her fifth goal of the season just two minutes from the restart.

Widdows with a great cross into the box Burle stretched to claim but she spilt the ball and M.Clark pounced on it at the back post beating the defender to put Chi deservedly ahead.

Attacks kept coming for the visitors but the final balls just narrowly missing their intended targets in the box.

The side netting was rustling after a M.Clark free-kick and Stephens missed a great chance with a free header from Widdows perfectly weighted cross.

It wasn’t all Chi as the Foxes looked for a way in and Katie McLoughlin smashed the ball aiming for the top corner but Dolbear got a strong hand on it sending it out for a corner.

Substitute Sara Tubby timed a run well to meet a cross in front of goal, she took a touch before curling wide.

Loughborough pushed for something but found a strong defence in their way, Tammy Waine and Tiffany Taylor in the middle holding firm with Dolbear comfortably claiming a long-range effort as the game entered stoppage time.

Chichester managed the game to the final whistle which also saw M.Clark look for a second goal from a free-kick however, it didn’t cause Burle too many issues.

The final whistle came and Chi got themselves back to winning ways which keeps them third in the table just a point behind leaders Coventry United.