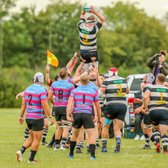 After a successful preseason, Chippenham were excited to get their season underway against newly promoted Sherborne RFC winning 41-33.

After a successful pre season, Chippenham XV were excited to get their season underway against newly promoted Sherborne RFC.

Conditions for the season opener were perfect for Chippenham to test their expansive game plan that they had been rehearsing all pre season. From the off, Chippenham started well putting pressure on ‘Borne’ deep in their 22. Set piece at the scrum was working very well so when Chippenham were awarded a penalty 10 meters from Sherborne’s try line they opted for a scrum. After a surge at the scrum, play broke down and Chippenham began to execute their pick and go game. This shortly led to the first try from loose head prop Tyler Lewis. Birthday boy Tom Douglas converted with ease; 7-0

In response to Chippenham’s early pressure and points, Sherborne strung together some really good phases and caught Chippenham napping on the blindside, scoring an unconverted try in the corner; 7-5. Some poor discipline from Chippenham then led to a further 3 points for the visitors with them taking the lead 7-8.

The introduction of Tom Fogerty to the mix led to another superbly worked try from a quick tap penalty. This again was converted by Douglas 14-8 in favour of the home team.

Whilst Chippenham captain Matt Dickens was receiving some treatment on the bench, his replacement Koto took advantage of some poor defence from the visitors and made a surging 60m solo run to their try line. This was converted by oli alcorn who had now taken the kicking proceedings.

With this lead, Chippenham then seemed to go to sleep, Leaking a penalty and try to the visitors taking the score to 21-16 at the interval.

After half time team talks the game opened up even more, with both teams trading blows. In quick succession Gareth Angell scored a try whisk was soon followed by 2 tries from Sherborne. None of these were converted, bringing the game to a draw at 26 points a piece.

Oli Alcorn then broke the stale mate with a penalty bringing the score to 29-26. What followed was a moment of magic from chippenham’s fly half Joe Thomas, which saw winger Charlie Parsons use his footwork to dot down a beautifully weighted cross field kick.

At this point Chippenham seemed to hit their stride and threw together some really good phases. Continuous pressure soon lead to a try for captain Matt Dickens with the score at 41-26 to the home side.

Sherborne soon responded with some similar phases which really tested Chippenham’s defence. ‘Nam’ weathered the continuous attacks putting in an abrasive defensive display but Sherborne finished strongly taking the final score to 41-33 in favour of the home team.

In a high scoring game, Chippenham’s fly half Joe Thomas was named MOTM after looking very comfortable pulling the strings in midfield.

After a very positive start, Chippenham look forward to their away trip to local rivals Trowbridge on Saturday 14th of September. Lots to work on at training this week but hopefully they can replicate their winning season opener.