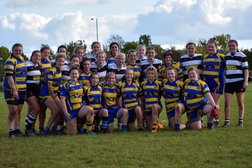 Old Richians take the first round agains a spirited Chippenham

Conditions were perfect for the first home game against Old Richians, the last few games have been close with honours going both ways. After last weeks gruelling game against Dings, Chippenham had too many injuries to field a full team, so Richians Kindly agreed to lend a couple players to our 11 and make it a 13 a side game and a game of 3 halves.

Chippenham Kick off just after 14:00. For the first 10 minutes both sides have moments of attacking play but defences are strong. Richians are awarded a penalty and opt for the posts but the ball falls short. On balance Richians have more possession and after a ruck near the Chippenham 22 the ball goes loose, Richians are quick to pick it up and the first try is run in.

Richians again retain a lot of possession and push into Chippenham's territory until Abi steals the ball in a tackle, she makes a long run before being bundled into touch on the Richians 22. Shortly after Richians get a break away try, making it 0-10.

Chippenham girls come back in style, Emily and Faith put in some big tackles and get the ball back. the ball is passed in towards the centre to Orla to Megan and then its s print for the line. The ref does well to keep up with Megan and it was neck and neck at the line! Although Megan maintains that she was slowing down for the last 20 yards :-).

Nice conversion from Evie makes it 7-10.

Change ends and Richians kick off.

Old Richians make a break and are stopped in the 22, they use their forward effectively and push towards the line, Chippenham defend strongly and repel 6 or 7 drives but eventually Richians make the line, nice conversion 7-17.

Chippenham look good for the next few phases with a noticeable big tackle from Libby, but the ball goes loose shortly after in a ruck and Richians are again the quickest to capitalise, passed out to one of their fast girls who runs it in from the 10 yd line. Converted, 7-24.

Another for Richians, very similar to the first on of this half, a break away from one of the forwards this time, caught by Megan well into the 22, followed by a brave defence from Chippenham blocking Richians in several phases, but eventually they push over the line. Converted 07-31.

Chippenham then dominated the next few minutes and were very close to scoring, through both forwards and backs working well together. However, Richians steal the ball and retain the next few phases back towards halfway. Its then a breakaway from one of the backs who run in from the half way line. Conversion 07-38.

From a scrum on the 10yd line, Cerhys runs in a lovey individual try and gets the conversion to make it 14-48.

Richians again push down the pitch with great retention through several phases and once again score a try using the forwards, no conversion, 14-53.

One more try from Richians in the form and individual run from half way, 14-58.

Old Richians again push into the Chippenham 22, but the girls defend massively through several phases (oral putting in 4 tackles in a row as Richians try to borrow through. Eventually the ball is turned over and Chippenham reap the benefits of that spirited defence and run the ball into the Richians half. The 2 borrowed Richians girls for this 3rd were very sporting and played really well, being instrumental in getting Chippenham into the 22 along with strong runs from Faith, Abi, Cerhys, ending in an offload to Annabelle who drives over the line for a great try. 19-58.

The final try was off the back of a scrum, won by Chippenham, out to the backs and the final try is run in by one of the borrowed Richian girls.
No conversion.

It was a good game, Old Richians are a strong team and Chippenham played with great attitude and heart despite being 4 players short, which showed in the way the scoreline started to come back Chippenham's way towards the end. I've said it before but Chippenham girls do themselves proud by keeping their heads up right to the end in the tough games and it shows. I'm looking forward to the rematch with a full u18s team.

Big thanks to Old Richians for the loan of some players and for a sporting game.