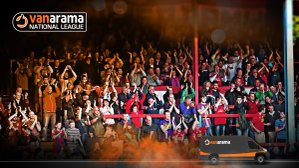 ---
The new season is nearly upon us - what have Chippenham fans got to look forward to?
Another enjoyable season. Under Mark Collier we are a very good side and have, so far, done decent business in the transfer market. We are always a side good for an upset over a big team (Torquay and Billericay last season come to mind) which makes every Chippenham game an exciting one for the fans.

So what will be different this season from last?
The main difference is the pitch. Last season it was really dry making the football very poor. However, thanks to some incredible work by our ground staff it looks great this year and I have no doubt the quality of football will improve with it.

What's been the best bit of business done over the past few months?
Whilst keeping our top scorer Nat Jarvis and rock-at-the-back Will Richards were two great bits of business, the signing of Dave Pratt from Wealdstone has to stand out. In his last spell with Chippenham he was incredible, which led to Wealdstone spending good money on him. I have no doubt he will be as good as ever on his return.

Who are the other sides to watch out for and could be in the promotion mix?
It is very hard to look beyond Havant. The signings they have been doing are impressive. I unfortunately think our main rivals Bath might have a good chance of promotion this season! The likes of Billericay have signed well, plus Dartford and Chelmsford.

Who could be the team to spring a surprise?
I wouldn't be shocked if Slough or Dulwich have a good go this season now they are well established in this league.

What ground are you most looking forward to heading to?
Lots of people I'd imagine will say Weymouth and I'll have to agree. Nice stadium with plenty of fans and the location certainly beats London or Essex, where about 90 per cent of this league seems to be.

And what game would you like to win more than any other you will play?
Easiest question, this. Bath away. Only real rival of ours and embarrassed us 5-0 when we visited last season. We beat them 5-2 away the season before so there is no reason we can't do something similar again.

What opposition player would you most like to see in your side - and what makes him so impressive?
Tom Smith at Bath. Annoyingly good against us and just what we would need right now, a creative attacking midfielder.

Finally, the key question - where do you predict your team will finish next season?
I will go for 13th. Despite the league looking even tougher than last year, with some solid business so far by Mark Collier I think we'll do similar to last year.

Vanarama, the leading van leasing brand in the UK, have recently launched the National League Club Reward Scheme to help fans back their club's budget. Every time a fan takes out a brand new van lease with Vanarama or a brand new car lease with Motorama their club will earn £100 and you will receive £30 cashback.

For the latest van leasing deals, head to Vanarama

For the latest car leasing deals, head to Motorama