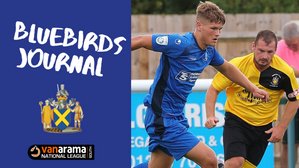 Welcome to the first edition of the Bluebirds Journal, our brand new preview section on the Club Website.

Welcome to the first edition of the Bluebirds Journal, we kick off our 2019/20 campaign with a trip to St. Albans City in the National League South on Saturday 3rd August 2019 with a 3pm kickoff in Clarence Park.

The two teams last met in March when we held to a 0-0 draw at Hardenhuish Park and previously in November with a 3-2 victory in the earlier part of last season in a game which proved very well to the goals department.

Our hosts are managed by Ian Allinson and his assistant Glen Alzapiedi, Ian has been in charge for St Albans City since 2016 and has had a very notable playing career, playing over 300 times for Colchester United during the 70's and 80's, and over 100 times for Arsenal in the latter part of the 80's.

ONE TO WATCH: Zane Banton

The forward has been a crucial part of St Albans's team throughout the last few seasons and joined them in 2017. He was recently out injured, when he suffered a serious leg injury while playing against us in our most recent encounter, back in March of this year.

The home of St Albans City is located in Clarence Park, and is easily accessible by bus or by train. The stadium is only a short walk from the St Albans City railway station and bus terminal. If you are travelling via car, details about the area can be found below.

Parking is available around the ground on local streets but please check parking restrictions The station is a 5 minute walk away, which has a large car park costing £2.50 on Saturdays.

Tickets can be purchased on the day (cash only). However, you can purchase tickets more cheaply from the online ticketing site, where all major credit and debit cards are accepted. Purchase tickets here:

More information about the game, such as details of parking and local pubs. Can be found on the St Albans City website here: Click here.

We hope to see as many of you at St. Albans City on Saturday, most importanly. Let's get behind Mark Collier, Gary Horgan and the team!