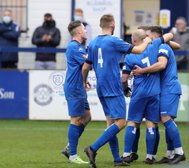 The A4 Derby saw the return of fans to the Thornbury Surfacing Stadium for the first time since March.

The A4 Derby saw the return of fans to the Thornbury Surfacing Stadium for the first time since March.
For the third successive game against the Romans the Bluebirds scored first, but having gone on to lose the previous two they managed a draw this time after being reduced to ten men seven minutes before the break., although numbers were evened up but not until three minutes from time.
The draw saw Chippenham's longest home run without a home win since joining National League South four seasons ago.
After two early Chippenham corners Bath's Tommy Conway saw his eighth minute shot blocked by Will Puddy's legs.
Two minutes later Joe Hanks tried to catch out Will Henry with a free kick but the former Bluebird stopper was not fooled.
On the quarter hour mark Hanks' low free kick went all the way through the Bath defence but wide of goal.
A minute later Bath's Donovan Wilson shot off target.
On nineteen minutes on loan Plymouth Argyle youngster Klaidi Lolos shot wide whilst moments later Brad Ash could not convert a cross. Chippenham went close on twenty one minutes when Ross Stearn's cross cum shot deceived Henry and hit the inside of the keeper's right hand post.
At the other end Tom Smith was off target with a long range effort. Stearn then hit a half volley over the Bath goal.
The Bluebirds took the lead on twenty seven minutes when Ed Jones' cross was hooked into his own net by Jack Batten.
On thirty eight minutes Lolos, who was on his home debut, received a straight red for a high tackle on Tom Mehew.
Two minutes before the break James Taylor crossed to Wilson who headed wide from a good position.
The first minute after the interval saw Ryan Harley's effort blocked, Puddy then held Grant Horton's header.
City won their first corner on forty nine minutes and Harley's delivery saw Smith's header blocked. Stearn then broke free and found Brad Ash but from a great position he blazed over.
Conway then similarly blazed over at the other end.
Marlon Jackson then tried to lob Henry but his effort was too low and Henry gathered. Smith's volley was then blocked whilst Puddy saved Wilson's shot.
On the hour substitute Callum Gunner stopped Batten's header from crossing the line. Bath's Frankie Artus fired high on sixty five minutes. Hanks then hit a half-volley straight at Henry.
Bath equalised a quarter of an hour from time when Artus's cross was headed home by Freddie Grant. Substitute Chris Zebroski then showed a turn of pace against the Bath defence but his final shot went just wide. At the other end Conway blazed over. Three minutes from time Bath's Wilson was sent off for fouling Puddy.
In stoppage time Henry made a superb save from substitute Alex Bray to ensure a point a-piece.