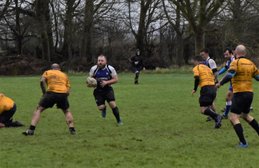 An incredibly hard fought battle between two evenly matched sides the Swans edged this encounter which was a far cry from the away game!

Earlier in the year a drastically weakened side travelled to Shaw with only 14 players available to start the game and with several injuries played much of the final quarter with just 12 men on the pitch, the home side cantering to a large victory.

Despite the forecast the pitch was in good condition as the teams kicked off with a stiff breeze and squally showers in the air.

A scoreless first half with the away side playing with the wind at their backs was a testament to the defensive ability of the home side to keep Shaw penned in between the 22's for much of the half. Shaw opted for keeping ball in hand rather than kick for territory which ultimately proved a key factor.

This was probably the best the swans have played "without the ball" this season maintaining the energy from training on Thursday and time and again effecting vital tackles and turnovers on a day where the conditions made things pretty challenging but both teams to their credit kept trying to keep the ball alive.

0 v 0 at half time and the wind at the back gave optimism and astute tactical kicking by Stradz time and again forced Shaw to play out from deep.

A penalty 20m out & in front of the posts was taken quickly much to the angst of the coaching team but after Gary had made good ground and five phases of tight forward play Paul Graham crashed over between the posts and with Gaz adding the extras a precious 7 v 0 lead after 62 minutes.

The game continued to ebb and flow and in the 77th minute a penalty for offside gave Gaz the chance to extend the lead to 10 v 0.

A satisfying win in challenging conditions and two very evenly matched sides, fair to say that Shaw were dominant in the scrum throughout the game but the clever tactical kicking allied to a ferocious defensive effort saw the home side to a deserved victory.