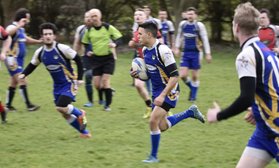 On a day where much sport was cancelled the two teams played out an entertaining match with the Swans running in 9 tries.

Despite the unknown situation this week credit to both clubs for putting out 2 sides on a blustery day where the rain mercifully held off.

Early pressure from the home side saw several try scoring chances spurned in the face of dogged defence by Congleton. Despite having the lions share of play when the visitors did get the ball they strung together a smart counter attack with six or seven offloads, despite the move breaking down it demonstrated how dangerous they could be.

On 13 mins after wave after wave of attacks Alex dived over the top of the ruck to open the scores, with Gaz adding the extras a 7 v 0 lead.

Much of the next 15 mins was a pretty even affair but the home side always looked more dangerous & from a solo break Gaz scored a great try which he converted for 14 v 0 after 27 minutes.

Steele then scored a trademark barnstorming run leaving several tacklers in his wake and with the extras added a 26 v 0 lead.

Alex bagged his second try after a great break by Gary, taken on by Kyle & Tomo and as the last defender made the tackle he was on hand to take the offload and score 33 v 0

As half time approached Simmy was on the end of a flowing move to take the scoring pass and round the covering tacklers to score, with the extras added a half time score of 40 v 0.

The visitors never let their heads drop and were rewarded with a try on 73 mins 50 v 7.

The final score of the game was scored by Gaz who converted for a 57 v 7 win.

Lots of positives from this game great effort from all the squad,