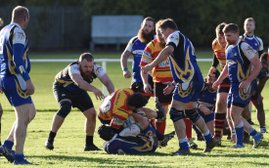 Firstly a big thank you to Port who were happy to lend us Sam & James to get the game on as a 15 a side match, true rugby spirit and much appreciated as we had suffered a number of late withdrawls and a number delayed arriving due to work committments.

The pack took a couple of scrums against the head and after a close drive then spinning it wide our new centre combination of George & Appi created space for Appi to score under the posts. 0 v 7

More pressure and slick hands then created space for Whitey to force his way over wide out. 0 v 12

More fast hands then saw a flowing move finished off by Josh and a 0 v 19 lead.

Port came roaring back, aided by a couple of needless penalties saw the pack driving hard at the line & despite being repelled several times eventually the dam burst with a try out wide 5 v 19

On the stroke of half time the home side scored a second try, almost a carbon copy of the first and a half time score of 12 v 19.

The second half started with two 80 metre counter attacking tries with power & pace with the back line interlinking superbly.

The home side again profited from some ill dicipline and a couple of penalties driving deep into the 22 and using the big ball carriers again forced their way over.

A try by centre George seemed to be the last score after another sweeping backs move and a 47 v 25 lead but a bizarre end to the game saw a kick to touch deep into injury time sliced into the Port centres midrift and a simple run in to see the final score 33 v 47.

A great win on the road with many stand out performances, the pack led by Sam Burns, Pete & Ed solid in the front row with Matt Geary & Chris Steele a rock in the second row and Josh, Tom & James a constant menace when the opposition had the ball and always looking to link with the powerful backline.

Will Thompson & Nags were moving the ball quickly ans George & Appi a constant menace in attack and defence with Whitey & Matty offering escellent support in both attack & defence.

Great to have Mikey Baker back for a full 40 mins after injury too.

3 from 3 so far in this league - onwards to Firwood Waterloo next week..