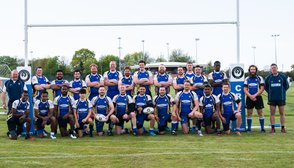 A great game showcasing the very best of rugby spirit saw a highly entertaining game against a worthy opponent.

Waterloo had been struggling for numbers during the week, as with many clubs a number of players not available meant that they arrived with 12 players. In the best tradition of the game we lent them our 3 replacements (and rotated them at half time) to allow the game to go ahead as a 15 a side.

After an even first 10 minutes a penallty out wide was taken quickly with the returning Jim Taylor at 10 seeing space wide out left and his cross kick was judged superbly for another returning player Stephen White to gather and go in unnopossed, with Jim adding the extrs 7 v 0

Gary Yates at inside centre then ended a flowing move with multiple phases and offloads to score under the posts, Jim Taylor again adding the extras 26 v 0

Gary Yates then added another following a Chris Steele break and smart offload, Jim again on hand to add the extras & a 33 v 0 half time.

A few rotations at the break and the third quarter saw Waterloo on the offensive for much of the period, some ill dicipline and with both teams at times struggling to get to grips with the interpretation at the breakdown a raft of penalties ceeding territory to the away side who eventually crossed the whitewash for a well deserved try 33 v 7.

A break in play due to an ankle injury to one of the Waterloo players saw a somewhat scrappy period of play before Matty Thomas won the battle of the brothers by squeezing past brother Alwyn to score wide out and end the scoring 45 v 7.

The game was played in a superb spirit and both teams retired to the clubhouse for a few drinks in trur rugby fashion.

Waterloo have some excellent experienced players and both teams battled hard for 80 mins and every score was hard earned for both sides.

Thanks to the Christleton players happy to slip on a Waterloo shire to keep the game 15 a side throughout.

Good luck to Waterloo for the rest of the season.