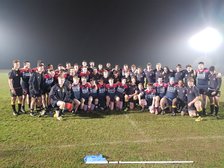 A try with the last play of the game from Adam Meehan and a conversion from Ryan Curran gave Cill Dara the narrowest of victories over the visiting South African school team. The visitors started the brighter and took the lead after 2 minutes when their hooker intercepted David Vaughan’s pass from a lineout and ran 30 meters to score. The out-half obliged with the extra points. St. David’s continued to dominate territory and possession and were rewarded after 20 minutes with another try, this time from their excellent out-half. Cill Dara finally began to get a foothold in the game as the half ended but failed to register a score.

The second half was dominated by Cill Dara and it was only 5 minutes old when Eoin O’Loughlin scored out wide from a scrum 8 meters out in the middle of the field. Ryan Curran added the conversion. Playing into the wind the St. David’s kicking game was not as effective as in the first half but they did get a breakaway try after 15 minutes when their centre found a gap in midfield and despite the efforts of Cian Buckley he managed to touch it down. The conversion was missed making the score 17-7 as the game entered the last quarter. Great pressure from both forwards and backs resulted in a Ben Savage try when he blocked down an attempted clearance from the St. David’s out-half and recovered the ball to touch it down. Once again Ryan Curran added the 2 points. Cill Dara were now on a roll but St. David’s must have thought they secure the win with a penalty with less than 10 minutes remaining. With time running out an unfortunate injury to Sean Conway held up play for a few minutes which was restarted with a St. David’s scrum. After the ball shot out of the scrum Tadhg Murtagh, now playing at scrum half, won the ball aggressively on the ground and set up the Cill Dara forwards to carry it forward. A few phases later an exquisite gubber from Jack Hannon was perfect for Adam Meehan to dot down close to the posts and give Ryan Curran the opportunity to win the game which he duly did.
Overall a very competitive game played in great spirit.
The lads now await a date and time for their D’Arcy Cup quarter final against Skerries.