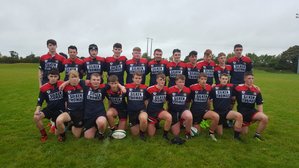 Cill Dara 18s bow out at semi-final stage of the D’Arcy cup with loss against Longford.

With Skerries pulling out of the competition to concentrate on the All-Ireland Cup and Longford beating the fancied Wicklow in the quarter finals this was an unexpected pairing in the semi- final of the D’Arcy Cup. The teams played each other in the preliminary rounds of the league early in the season in a 13 v 13 game (due to lack of numbers from Longford) and although Cill Dara ran out easy winners in the end of that one, an impressive second half of the season by Longford meant this was had the makings of a very close affair and so it proved to be.
Longford started the game at a blistering pace and before Cill Dara could settle in they were two tries down. After that initial 10 minutes Cill Dara wrestled control of the game and were dominating the breakdown resulting in a couple of long range penalties that went narrowly wide from the boot of Tadhg Murtagh. Cill Dara did get on the score sheet after 15 minutes with a well worked score from Ben Savage. Aided by a breeze Cill Dara had Longford pinned back in their own half and scored tries from Cian Buckley, Cody O'Reilly and Eoin O'Loughlin. In between Longford got two breakaway tries to leave only 2 points between the teams at half time.

Once again Longford were on the scoreboard 2 minutes into the second half when they used the strengthening wind to their advantage pinning Cill Dara back. However it was the Cill Dara forwards that were dominating the game with half-breaks and huge carries. A penalty from Tadhg Murtagh after 10 minutes made the score 27-25 to Longford and when Ross Dooley crossed again after huge work from the forwards put Cill Dara 3 points up and in the ascendency. A Longford penalty with 10 minutes to go put the sides level and two minutes later the game changed on a single refereeing decision.
Ben Savage was adjudged to have tipped tackled a Longford player which resulted in a very harsh yellow card with 8 minutes to go. Longford capitalized on the extra man very effectively and scored two converted tries in the period. Ben was no sooner back on when Adam Meehan crossed the line for a converted try. This really underlined the game changing event that was the yellow card. Cill Dara claimed the restart and despite their best efforts they could not get out of their own half eventually conceding a penalty that ended the game.
Overall a terrific game for the neutral that could have gone either way.

That completes the competitive games for the year, however the team have one last blast against Windhoek Afrikaans Privaatskool from Namibia on Saturday morning next.