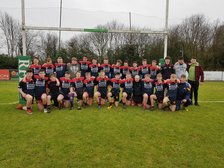 Great year for the 18s

North Midlands Area League (Osbourne Cup)
This as usual was the first competition of the year starting back in September. It kicked off with a very entertaining blitz hosted by Athy and had teams from Athy, Newbridge, Naas, Clondalkin, North Kildare and Portarlington. A half-day of short matches resulted in 4 wins, one draw and a single loss. As a result of the blitz (and with Clondalkin withdrawing) the area league was divided into two groups of three, Cill Dara picked in the group with Portarlington and Naas. Cill Dara won both group games and then proceeded to defeat local neighbours Newbridge in the semi-final. That set up a mouth-watering final against Naas in Naas over Christmas and despite going behind early in the game Cill Dara fought back to be the deserved winners and claim the silverware.

Leinster Youth League
The league was played in two phases. For phase 1 Cill Dara competed in section B and kicked off with 6 wins in a row against Tullamore, Naas, Longford, Mullingar, Boyne and Enniscorthy/Wexford before getting a wake-up call with a big defeat against a Skerries team that would progress to the All-Ireland final. Easily qualifying for the Premier division the lads once again started well defeating Gorey and Kilkenny before losing their second game of the season to an unbeaten Wicklow side boasting 3 Irish U18 internationals. That set up a semi-final against Skerries and once again they were out-classed by the best underage side in the country. Skerries would go on to defeat Wicklow in the final.

Leinster Youth Cup (D’Arcy Cup)
Cill Dara kicked off their Cup run with a comprehensive victory over Roscrea/Birr to set-up a quarter final against Skerries. Skerries commitment to their All-Ireland venture saw them withdraw leaving Cill Dara with a semi-final against Longford who surprisingly had beaten Wicklow in their quarter. Having imported a few Mullingar players since they last met, this was a very different Longford side and coupled with the fact that Cill Dara could only gather a squad of 16 players, the honours went to the opposition in a splendidly open game in Edenderry … it’s hard not to think what might have been had Ben Savage not been very very harshly given a yellow card for what supporters of both sides agreed was a tough but fair tackle with 10 minutes remaining and Cill Dara in the ascendency.

Touring Teams
One of the highlights of the year was the experience the lads gained from playing touring sides from South Africa (Grootvlei and St. Davids), Argentina (UMP) and Namibia (Windhoek Afrikaans Privaatskool).

The year ended with the presentation night where around 70 players, parents and supporters enjoyed some food and drink. The players were presented with their Osbourne Cup medals and the club awards were presented, with the top award “Players Player of the Year” (voted for by all the players) going to Tadhg Murtagh, with special merit awards to Adam Meehan for “dedication to the cause” and Chris Walsh for “most improved player”.
We had very few long term injuries this season which is a credit to the training the guys did and in particular the Strength and Conditioning training run by Dave O’Neill. One notable absentee was Daniel Giltrap who was unfortunate to injure his ankle in school and kept him out for the entire second half of the season.

Many thanks to all the parents and friends who travelled the province in support of the team. Huge thanks also to everyone who helped out with the hospitality for our visiting teams by providing food and/or helping out in the kitchen. The hospitality may not always be reciprocated on our travels but visiting supporters are always appreciative of the efforts we make.
Also a special thanks to all the team of coaches who give up their time to help out – it takes a lot to keep a team going and the following list explains just how many .. Clem Hannon, Declan Prendergast, Declan Conway, Kieran Conway, Padraig Murtagh, Mick Meehan, Eoin Conway, Tom Downey and Paddy Behan. Also thanks to Jock for excellent pitches all year, Robbie Doyle and Chris Moore for sorting out referees and Kathleen and the team in the club-house all the tasks too many to mention.
This is last season most of these guys (some of who are together since U/8) will play together as a youth team but hopefully the group will stay in the game, preferably for Cill Dara, and become part of U/20s and senior teams from next year on. Best of luck to those who still qualify for the 18s next year.