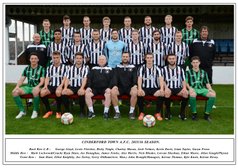 Cinderford Town committee member Stuart Tait has released the following statement on behalf of the club...

"Having taken as many views as possible within the last 24 hrs whilst adhering to the League deadline, I can confirm I have wrote to the league today confirming that we will be not be taking Promotion and have asked to remain in our present League ."

"The decision was made with a heavy heart and after such a brilliant season ,but the security and the sustainable of the club was of utmost importance as the Club has to come first and not our ambitions but that doesn't mean we have to curtail those ambitions going forward. "

"Having said that with all the goings on in recent wks its been a pleasure to see so many rally around in a joint effort to establish this club on a stronger footing which will give us the sustainability to progress this clubs future."

"Remember the AGM on the 5th and the new opportunity for you all to be part of something special."