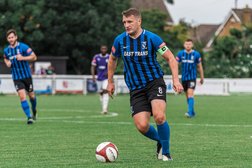 GOOD FORM CONTINUES WITH AWAY WIN!

With injuries gradually clearing, manager Dave Smith had a few more options. However, there were still a number of senior players absent.

A fair few travelling fans had made the relatively short hop across to Scunthorpe. Incredibly, it was the first fixture on the road for 280 days! The supporters’ continuing loyalty is certainly well appreciated by the management & players.

Clee were immediately on the front foot on a warm evening. Batty fired narrowly wide and home keeper Quibell denied Flett, pulling off a smart save from a curling shot.

The Owls did not have much longer to wait though before hitting the front after 17 minutes. Sustained pressure eventually led to a chance for Oli Donald. The well-placed big defender made no mistake from close range, to snaffle his second of pre-season.

As the half wore on, the away side continued in the ascendency. The Poachers did have the occasional dangerous foray, with Donald making a perfectly timed saving tackle, and Ayris was lively in attack.

Nevertheless, it was a slight surprise that Clee did not add a second before the interval, which would have been a merited reflection of their dominance.

Plenty of rolling substitutions throughout the second-half, with all of the 16-man match-day squad gaining valuable match time.

Alex Flett (pictured on the ball against Grantham Town) provided the cushion that the Owls had been looking for in the 57th minute. It was a good one as well! The captain picked up the ball on the edge of the area following intricate teamwork and smashed that ball in via the underside of the crossbar.

Clee were still pressing and Stead, making an extremely eye-catching first full start, tested the keeper in the 70th minute with a daisy-cutter.

It was left to the all-action Josh Batty to complete the night’s entertainment. The striker, in his second spell with the Owls and a favourite of the faithful, hooked in from around 10-yards out.

The only blot on the copybook, of what was otherwise another highly satisfactory performance, came late on. Young Alfie Boswell saw red for a mistimed challenge.

3-0 and probably could have been a few more to be fair!

Overall a nice workout and a second clean sheet on the bounce. Sure to be a much tougher test at Scarborough on Saturday (3pm), and it will provide a decent gauge to our chances for the campaign.

“The fixture was very worthwhile, providing everyone with valuable minutes in a match setting, rather than training.

Delighted with another clean sheet. We perhaps should have converted a few more chances but generally pleased with the lads.

Finally, I noticed a lot of support – thank you to everyone that travelled”.