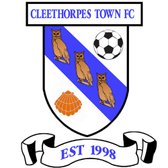 The Owls departed from the FA Trophy at the first hurdle at a sun-drenched Myenergi Stadium on Saturday afternoon. Two late goals from Shildon earned the County Durham outfit a 2-0 win.

On an unusually warm & sunny October day, the decent sized crowd settled in for a hopefully entertaining knock-out tie.

In truth, the first-half did not set the pulses racing! Clee played some good build-up football but chances were at a premium.

Shildon came closest to breaking the deadlock. Stopper Dixon did superbly well to acrobatically tip a close range shot onto the crossbar and away to safety.

Dixon was again alert to parry a free-kick before Lowe nodded a yard or so wide. Then sub Robertson saw his shot turned aside by Newbrook in Clee’s best moment.

Shildon though settled the match in decisive fashion late on. Dean Thexton weaved his way beyond three challenges and planted the shot into the corner. Then, after Robertson had headed over when well placed for the Owls, Will McCamley side-footed home.

Thanks to everyone who came along today, marvellous support as always.

Just the NPL for us now and we enter a crucial period with several home games coming up. Next Saturday, we entertain Sheffield FC – see you there!