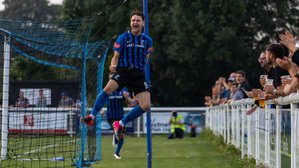 OWLS MARCH ON IN FA CUP!

A fantastic team performance saw the Owls fly past National North outfit Alfreton Town 1-0 in the FA Cup on Saturday afternoon. Brody Robertson scored the only goal to register a thoroughly deserved upset.

For the first time this campaign, Dave Smith named an unchanged starting XI. With injuries beginning to clear, the bench had a strong feel to it as well.

Despite their recent good form, Clee entered the tie as underdogs. However, there was definitely optimism in the air at the Myenergi Stadium by kick-off time.

It was clear from the off that the visitors would be adopting a direct approach. No real surprise with Rhead leading the line. Nevertheless, the back 3 of Walker, Cooke and Donald all provided outstanding displays to ward off the threat.

Alfreton’s play was too predictable in fairness – Lund’s long throw being their main attacking outlet. Keeper Jackson was a commanding presence between the sticks however, claiming high balls and patrolling his area with authority.

Clee gradually grew into the contest and then took command, matching their opponents for physicality and playing the much more attractive football.

A couple of flowing moves almost created a clear opening, with just the final pass going astray. Batty, who was his normal all-action self, went closest to breaking the deadlock when firing into the side-netting from an acute angle.

It seemed likely that the opening goal was going to be crucial, and it fell the way of the Owls on 50 minutes.

A fast-paced counter opened up the Reds and when the opportunity fell to Brody Robertson, the striker gleefully smashed it into the net (picture credit: “jumping for joy!” by Hayden Newbegin).

Just the boost needed and Clee continued to bridge the 40-place gap in the non-league pyramid with confidence. Every player, without exception, was putting in a real shift and Alfreton had no answers.

Scorer Robertson should have wrapped matters up after good work from sub Oglesby, firing high over the bar at the Church End. Any thoughts that the miss would come back to haunt the Owls largely disappeared with a shade less than 10 minutes left on the referee’s watch.

Tom Allan went flying recklessly into a tackle, as the visitors’ frustration reached a crescendo. All eyes turned to the official, who brandished a straight red card. Despite complaints, it looked from the Main Stand to be the correct decision.

Alfreton tried to galvanise themselves into a final effort but Clee, backed by their tremendous fans, showed great composure to complete an inspiring win. The run to the 3rd Round Qualifying equals the club’s best run in the famous old competition.

Days like this really is what non-league football is all about, isn’t it? Absolutely brilliant, everyone should savour the rest of the weekend, ahead of Monday’s draw!

To outplay a National North team takes some doing – congratulations and well played to the management & players! Whoever we get in the next round, there will be nothing to fear.

Back to reality at high-flying Ossett United on Saturday. It will be our last NPL fixture until mid-October, so we could do with a good result. Until then though, let’s all take time to dream about more FA Cup glory…