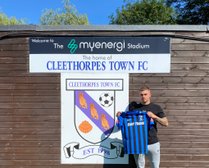 INJURY TIME AGONY FOR THE OWLS!

Shildon emerged 2-1 victors at the Myenergi Stadium on Saturday afternoon, with the Owls missing a hatful of chances to make the game safe. New boy Jack McMenemy (pictured before the start) capped an excellent debut with the goal.

Drama in the warm-up, with Scott Vernon having to withdraw with an injury. McMenemy came in as a late replacement. In the other change from last time out, manager Dave Smith Paul Walker replaced the injured Oli Donald.

Despite the big attendance just down the road at Blundell Park, the Owls’ faithful plus a decent following from County Durham ensured a good atmosphere at kick-off. The action was played out in very warm conditions, with the pitch in fine fettle.

Clee got into their stride quickly and Cooke had a penalty appeal waved away in the 11th minute. Keeper Jackson was largely a spectator at this stage, and therefore it came as no surprise when the Owls moved ahead.

A flowing build-up found Jack McMenemy around 12-yards out. Controlling the ball in an instant, the debutant turned on a sixpence to wrong-foot his marker and then find the corner of Newbrook’s net.

It was incessant pressure for the next 10 minutes or so. Cooke, McMenemy, Venney and Flett all had opportunities to put the Owls in an unassailable advantage. However, with a combination of brave defending, misplaced finishing and downright bad luck, the second never arrived.

The Railwaymen got into the contest late in the half, as Walker was needed to make a timely intervention. Then, in the final play, Oglesby was through, but the winger did not get full purchase on his shot, allowing Newbrook to make a comfortable save.

Within 90 seconds of the restart, Shildon were level. Daniel Moore stooped low to head in.

A shock for Clee and the clash became much more even. Nevertheless, the chances continued to be created by some confident football. Robertson hit the outside of the upright, whilst Venney and Walker also went close to restoring the lead.

At the other end, Topliss was alert to head off the line.

As stoppage time was entered, it looked certain to end with honours even. Not to be though, Dominic Curl appeared in the last minute of the additional period to smash in the winner, leaving the Owls to reflect on what might have been.

Thanks for your support today – we next play on Monday (3pm) at Bridlington Town… hope to see you there!