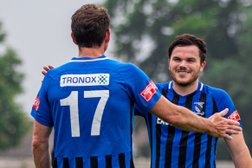 HOLDERS LOSE OUT ON PENALTIES!

The Owls faced the agony of a penalty shoot-out loss at the Myenergi Stadium after being pegged back deep into injury time. The entertaining lunch-time tie ended 1-1 after 90 minutes, before Stamford progressed 5-3 on spot kicks.

Plenty to consider for the management team following the excellent opening 4-1 win over Irlam. A couple of injuries, added to Covid self-isolations and training disruption, depleted Dave Smith’s options. Nevertheless, the manager remained confident in his 16-man match-day squad.

Having won the last two runnings of the Lincolnshire Senior Cup, expectation was high at kick-off that the Owls’ proud record in the competition could be extended.

A confident claim for an early penalty, when Robertson appeared to be pushed to the floor, was waved aside by the referee. After this, Clee were dealt a double blow, as both Vernon and Lofts departed the action with injuries.

The highlight of the half was provided by Flett. The captain unleashed a thunderbolt from 20-yards, which shook the crossbar.

Shortly before the interval, Robertson was again left cursing his luck when upended in the box. The official ruled a coming together of the challenging players, much to the dismay of the home faithful.

Clee emerged from the dressing room in positive mood, forcing 3 early corners. However, it was keeper Nicholson who had to show his mettle when Stamford broke quickly, smartly denying the dangerous Chitiza with his foot.

It continued to be end-to-end, as two good teams wrestled for the initiative. The Owls were slightly in the ascendency by the 70th minute, particularly when Topliss went into overdrive down the left flank. Frustratingly, an offside flag ended a period of pressure.

Just when it seemed that the deadlock would not be broken, Clee snatched the all-important opening goal in the 83rd minute. Batty was clumsily bundled over and this time Mr Maddison made the award. Up stepped Harry Middleton (pictured with Scott Vernon) to coolly send visiting stopper Peverell the wrong way from the spot.

Delight for the vast majority of the crowd, but Stamford still posed a danger and hit the bar towards the end of normal time.

As the clocked ticked into the final 30 seconds of the added period, the Daniels produced the leveller. Tendai Chitiza cleverly created space through the inside-left and his shot found the bottom corner.

Stamford, with the slight advantage of going first in the shoot-out, scored all 5 of their penalties to progress to the quarter-final.

Middleton, Topliss and Batty were successful for the Owls. The unlucky man to miss-out on this occasion was Alex Flett, who had enjoyed an excellent 90-minute shift in the heart of midfield.

A very cruel way for our reign as holders to end!

Nevertheless, the lads can be well pleased with their endeavours and, on another day, could easily have won in normal time. Another pleasing performance overall to add to last week's victory.

Finally, today demonstrates the ups and downs of sport. Anyone remember who scored our decisive penalty when we first won the Senior Cup (beating Stamford!!)? Yes, step-forward one Alex Flett – chin up captain, you played great today!