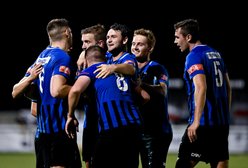 A memorable night at the Myenergi Stadium saw the Owls put in a tremendous performance to record a 2-1 verdict over higher-ranked Hednesford Town in the FA Cup 1st Round Qualifying.

Goals on the evening for Clee were both from headers, courtesy of Tim Lowe & Oli Donald respectively.

Traffic problems for the visitors delayed the start by nearly 20 minutes. That did not bother the expectant crowd though, which was in excess of 400. It was lovely weather, and the Owl army was out in full boisterous force. It provided a tremendous atmosphere for a cracking match.

Clee settled well – Venney, Donald & McKay all went close, as the home side had the better of the opening skirmishes. Hednesford were definitely rattled by the fluency & commitment of their Northern Premier League opponents.

However, the Pitmen are riding high in the Southern Premier League Central for a reason and, against the general run of play, they gained the initiative just beyond the half-hour mark. Andre Landell, who was once again proving a handful, deftly flicked a low cross from the left beyond stopper Jackson.

This provided an understandable boost for Hednesford and Landell curled inches wide a couple of minutes later.

Despite being behind, the Owls continued to play patiently and, as the break loomed, there was still the prospect of a comeback.

Harry Middleton was withdrawn at half-time with a knock, Tim Lowe entered the fray.

It was to be the sub who provided the catalyst for the turnaround in the 52nd minute. A tantalising floated ball was simply perfect for Lowe, who positively charged in to bullet an unstoppable header home for the much-deserved leveller.

Things were now on a knife-edge! Hednesford hit the base of the upright and a corner from Flett bounced to safety off the crossbar.

Nevertheless, the Owls remained the more threatening and the decisive moment arrived around midway through the second period. Oli Donald who, along with his central defensive colleagues of Cooke & Walker, had been dominant in both encounters, rose highest to score for the second round in succession (picture: “celebration time!”).

The place was rocking, and everyone was urging their team to see out the victory. To be fair, this was never really in doubt – the Pitmen had lacked attacking penetration after the interval.

Indeed, it was Robertson who nearly made matters totally safe, shooting wide when well-placed in the 82nd minute.

At the end of a tense period of added time, the whistle sounded and it was job done! The ecstatic spectators provided a great reception. The mouth-watering prospect of a home tie against National North outfit Alfreton Town lies in wait!

What a great night – surely one of the most enjoyable moments since our return “home” to Linden!

No arguments from Hednesford at the end that we had been the better side over the 180 minutes of the 2 enjoyable matches. Thank you to their officials for the kind comments to me afterwards.

Josh Venney was awarded the man-of-the-match by generous sponsors Docks Beers. No arguments there, but everyone in the blue & black can be very, very proud this morning – well played!!

Back to the bread-and-butter of the NPL on Saturday (3pm). A long trip to Stockton Town for an important clash, as we keep our eyes firmly focussed on the top 5. Hope to see some of you there!