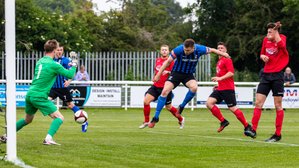 Clee served up an excellent display to record a convincing 4-1 verdict over North-West Counties League side Irlam at the Myenergi Stadium on Saturday afternoon.

It had been a busy period for Dave Smith in recent weeks. The manager had secured the services of 4 new players – Josh Batty, Jordon Cooke, Luke Lofts and Tom Nicholson. The acquisitions were all added to the existing squad to form a strong looking match-day 18.

There was a terrific atmosphere at kick-off, as the fans returned for the first time in over 8 months! It did not take the Owls long to reward their loyalty, racing into an early 2-goal lead.

In the 7th minute, Brody Robertson reacted quickest to a loose ball in the area, firing into the bottom corner. Then, with the visitors still reeling from this setback, Oli Donald (pictured) rose highest to send home an unstoppable header.

To their credit, the Manchester-based travellers responded as the clock ticked beyond the quarter-hour mark. A floated free-kick from the right located Irlam’s number 5. The big defender calmly stroked the ball beyond keeper Nicholson, who had no chance.

After this flurry of goals, the encounter settled into a pattern of the Owls doing most of the pressing, and also playing some pleasing to the eye football.

Oglesby, with an audacious lob that was just too high, and Lofts, who had a shot saved after a mazy run, came closest to registering their team’s third.

All the subs would see action in the second period, and it was one of them that set-up a goal within 150 seconds of the restart.

Venney demonstrated fine skills through the inside-left channel, before squaring for Josh Batty, who made no mistake from close range. The scorer very nearly grabbed a brace soon afterwards, his fierce effort cannoning away to safety off the woodwork.

Captain Flett tested the visiting stopper, but it was left to the ever-reliable Scott Vernon to complete the day’s entertainment in the 88th minute.

The front-man, who has the welcome knack of finding space in the danger-zone, deftly flicked home. This put a deserved gloss on the score-line, which now more fairly reflected the Owls’ overall dominance.

Great to be back!!

Plenty to look forward to in the next 9 months, if the opening performance is a guide. The new boys all settled in well and manager Dave Smith was rightly delighted afterwards, commenting:

“I am very pleased with the performance. We adopted a slightly different style of play, which worked well. I would not pick out an individual man-of-the-match, all the lads put in a great shift.

Thanks to the fans also, everyone really appreciated their support.”

Next up is the start of the defence of our Lincolnshire Senior Cup. We entertain Stamford on Saturday 10th July – note that it there is a lunch-time kick-off of 12.30pm. It should be a cracking tie… see you there!