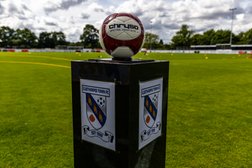 A crazy end-to-end encounter finished 4-4 against county rivals Lincoln United on Tuesday evening at the Myenergi Stadium. The Owls needed to twice come from 2-goals in arrears to gain a point, with Brody Robertson and Scott Vernon grabbing a brace apiece.

Matty Powell and Jon Davy oversaw team affairs for the Lincolnshire derby. Two changes were made from the side that lost 2-0 at Marske United. Harry Middleton and young Lennon Stead came in to replace Josh Venney and Josh Batty respectively.

It was a drizzly night, but muggy, as an excellent crowd in excess of 400 took their positions in the stands.

Just 4 minutes had ticked by when the Whites gained the initiative. Jack McMenemy finished well from the apex of the box. Not the start that the doctor had ordered for the Owls! However, credit to Lincoln, who were lively throughout the opening phase.

Clee gradually grew into proceedings though and forced an equaliser just before the half-hour mark. Brody Robertson controlled a through ball superbly on his chest and the striker coolly slotted underneath Woolley.

Most of the faithful were now expecting the Owls to take command. United responded gamely to increasing pressure, repelling the home advances and re-took the lead shortly before the interval.

Matt Cotton sized-up a free-kick around 25-yards out. The midfielder delightfully curled the ball over the wall and into the net, beyond the reach of stopper Jackson.

The game continued at a frenetic pace, and the impressive Andy Janssen rifled the visitors further ahead in the 49th minute to put the Owls in trouble.

Clee’s response was immediate and, after Scott Vernon had missed a golden chance, the striker made amends. Great work down the left flank from Topliss and Flett set-up Vernon, who converted from close range.

The topsy-turvy nature of the contest showed no sign of abating. Lincoln were awarded a penalty after 63 minutes following a foul on McMenemy, Matt Cotton gleefully re-established the visitors’ 2-goal advantage.

It was hard to keep pace with the breathless action and when Scott Vernon converted a spot-kick with over a quarter of the thriller remaining, any result seemed possible!

Lincoln had played resolutely but, as the match reached its enthralling climax, it was Clee finishing much the strongest. Wave after wave of attack bore down on the visiting defence, and the leveller arrived with 7 left on the referee’s watch. Brody Robertson was on hand to help himself to his 4th of the fledgling campaign.

The crowd roared the Owls on to find the winner. Both of the combatants had chances to seize the spoils, but the richly-entertained fans were destined to witness Clee’s first 4-4 score-line since October 2017.

Wow – as I said at the start of the report…a crazy game!

To take the positives, the lads battled back well from trailing by 2 with under half-an-hour left to claim the first NPL point of the season. Also, I think our captain Alex Flett has been fantastic in our opening games, really leading from the front. Well played also to Brody Robertson – 4 in 3, great stuff.

Finally, many thanks for your support, see you on Saturday (3pm) for some FA Cup fever against Loughborough Dynamo.