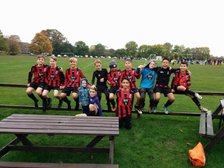 Great report from our under 12's Pattesons

CT Pattesons U12 took on Marshall Sports U12 at The Linden Homes Ground, Thank you Gary Smith for Marking out the 9v9 pitch in blue, spot on.

Game got underway at 1pm, and from the very off we could see it was going to be a close game, good saves by both goalies kept the game at 0-0 until the 18 minute when a clearance by CT deflected of a Marshall Sports player and into the goal, 1-0 to the visitors. Cleethorpes kept their heads up and came close with several shots at goal - Lucas, Sebastian, Harvey and Josh all coming close so CTFC went into Half Time a goal to nil down.

Second half so Harvey and Sebastian swap positions of play and from the start of the second half CT came out wanting to win the game and pressured well, again both keepers made great saves keeping the score 0-1. Once again some great passing by the Junior Owls saw some precision passing so the ball come to Harvey who took the ball and levelled the score in the 18th minute of the second half. CT kept pressing and Marshalls had the opportunity to take the lead but Ollie kept the ball out and full time finished 1-1 so ET beckoned.

First half of ET got on the way and by now our Junior Owls dominated the game and in the 3rd minute of first half of ET the ball was crossed into the Marshalls penalty area and this was meet by a well taken volley by Lucas and it was 2-1 to the Junior Owls. Being 2-1 up the Jr Owls continued to dominate and their stamina was getting the better of Marshalls who appeared to fade slightly however kept pressing, then Harvey slotted another on the day to make it 3-1 to the Jr Owls in the 5th minute of the first half of extra time. Half time and Jr Owls came off with their heads high and up to see the second half off.

Great play in the second half of extra time and great football by both teams and a credit to the game, Junior Owls held Marshall's off and finished off victorious 3-1 and into the draw for round three.

Mention to Ollie, Aws, Josh, Noah, Lucas, Harvey, Sebastian, Arran, Elias, Gene, Liam and Alfie for all putting great effort in and getting us the result when it counted

Thank you to Jono and all in the Club, boys loved the hot dogs and chips and parents enjoyed the sandwiches.

Wishing Marshall Sports U12's good luck for the rest of their league season.