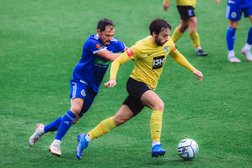 It proved to be a bridge too far in the FA Cup for the Owls at Curzon Ashton on Saturday afternoon. The high-flying National North outfit triumphed 4-0 at a wet Tameside Stadium, with all the goals coming in the first-half.

No surprise that Dave Smith kept faith with the side that played so well in the victory at Ossett, apart from one enforced change.

Josh Batty came in for the Cup-tied Jack McMenemy. There was also the welcome return on the bench of the recovered from injury pair - Scott Vernon and Luke Lofts respectively.

Expectation was high amongst the sizeable number of travelling fans by kick-off time. Clee were in tremendous form and a place in the final qualifying round for the first time was a tantalising prospect.

However, the Nash exploded from the traps to devastating effect, registering 3 times in the opening 13 minutes. Less than 100 seconds had elapsed when Harry Flowers rose high on the 6-yard line to head in a left-flank corner.

The Owls were caught cold and, after stopper Jackson had pulled off a smart save to deny Thomas, Flowers grabbed his second in the 12th minute. It was an action replay of the first as well, the big central defender again directing a corner into the net.

Worse was to follow almost immediately from the restart, Alex Curran blasting home to give Curzon a very comfortable advantage.

Indeed, it was the Nash who carried the greater attacking menace throughout the first 45, and Jordon Lussey piled on the misery with the pick of the afternoon after 31 minutes. Challoner’s cross was knocked down and the forward drove in a first-time half-volley.

To their credit, the visitors did not lose their collective heads and continued to battle hard for a lifeline. Half-chances were generally the order of the day. However, in the best moment for Clee, Batty was unlucky to see his fierce 20-yard drive fly agonisingly just the wrong side of the upright.

It would have been easy for the Owls to completely lose heart. Not a bit of it!

Great spirit was shown by the players in the second period, bridging the 50 or so place gap in the footballing pyramid, and Clee could probably consider themselves slightly unlucky not to have “won” the half.

There was also the welcome bonus of match time for Lofts and Vernon, who both showed no ill-effects from their recent absences.

Nevertheless, no consolation goal was forthcoming, and you have to be honest enough to admit that you have been beaten by a very good side.

A fine ovation from the appreciative spectators at the end. It has been an enjoyable run for the Owls, with the notable scalps of Hednesford & Alfreton along the way, and there was absolutely no disgrace to lose against a classy Curzon Ashton.

No complaints on the day.

Of the 5 step 2 sides that we have encountered in recent seasons, Curzon were far and away the best in my opinion. Good luck to them in the next round. We can take heart from the second 45 though – well battled!

We start another knock-out adventure on Saturday. We welcome Shildon to the Myenergi Stadium in the FA Trophy – see you there.