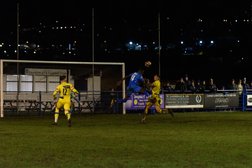 A crazy period of additional time saw the Owls fall to a 3-2 defeat at Dunston on Saturday afternoon. Leading 2-1 with 90 minutes on the watch, the visitors had a penalty saved before being rocked by two very late strikes.

Curtis Bateson and Dec Howe were on the mark for Clee.

Nathan Arnold made three changes to his starting XI, which fought out an honourable 0-0 draw at North Shields. New signing Tom Jamieson came in for Josh Smaller. Bateson was preferred to Harvey Tomlinson. In the final alteration, Sam Topliss got the nod over the injured Will Annan.

Having survived a precautionary early morning inspection, the pitch was very heavy. It cut-up badly during the action, with plenty of slips from all involved.

Nevertheless, the unpredictable surface and superb commitment from both sides made for an exciting spectacle.

The Owls took the lead in the 7th minute, after enduring a scare at the other end.

Thear crashed a drive against the underside of the crossbar and then, as play quickly switched, Curtis Bateson snaffled the opener.

It was a good one as well, the winger picking-up the ball on the apex of the box, jinking inside and sending a left-footed daisy-cutter into the corner.

Lowe was in commanding form at the heart of the defence and did well to head a Pearson effort off the line nearing the half-hour stage.

It was Bateson's turn to be the provider with 37 gone. A floated cross was delightfully guided in by Dec Howe. The prolific marksman cleverly found space to head beyond Staples.

Any thoughts that Clee were in for a comfortable day were quickly dispelled though. Old adversary Carl Finnigan converted a pass from Elliott, within 90 seconds of the Owls’ second.

The second period was a real battle in the mud, before the game exploded back into life in injury time.

In the pick of the chances, a darting run by Oglesby caused trouble for the rearguard, with Pearson nearly gifting Clee a third via an own goal. For Dunston, a Thear header from a corner went closest to grabbing an equaliser.

7 minutes added was not a welcome sight for the battling Owls.

But, as the clock reached the 92nd minute, a penalty award provided the perfect opportunity to ensure all the points would head back down the A1.

No real protests about the referee’s decision, young sub Tomlinson was clearly fouled as he surged towards the by-line. Up stepped McMenemy but the diving Staples spread himself to make the stop.

In a dramatic finale, UTS snatched an improbable winner. A corner resulted in Michael Pearson scrambling the ball home from close-range.

No-one can deny that was a real sickener!

Leading into injury time and with a penalty awarded, we looked an absolute certainty to take the points. Not to be though, so we just have to dust ourselves down and quickly re-group.

Despite the result, there were definitely some positives to take away. On a glue-pot “1970’s style” pitch, which made fluent play difficult, I thought the effort from the players was quite exceptional.

Stockton next week and a big opportunity for a bounce-back… see you there!