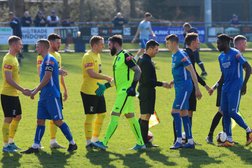 Clee made light of a 6-hour plus round trip to the banks of the River Tyne on Saturday afternoon. Dunston were defeated 2-0, with Brody Robertson registering a brace for the second weekend in succession.

The victory edges the Owls to within 4-points of mathematically securing a play-off berth.

No real surprises that Dave Smith kept faith with the same starting XI that had gathered the points at Stocksbridge. However, the manager’s best laid plans were interrupted, as Luke Lofts was injured in the warm-up. In came the Hull City loanee McCauley Snelgrove. There was a welcome return on the bench of Josh Venney, and young Henry Parr also got a taste of the first-team experience.

It was beautiful weather in the Borough of Gateshead at 3pm, pleasant Spring sunshine and a light breeze. However, the pitch played in a slightly bobbly manner throughout, making fluent football tricky.

The opening 45 was attritional, with very limited action in the respective penalty areas.

In the best moment on 42 minutes, Tom Jackson certainly earned his corn. The stopper, who had earlier safely gathered a Coulson drive, acrobatically rose to tip-over a goal-bound lob from the dangerous Djalo.

At the other end, an appeal for a penalty was the closest the Owls came to registering.

More of the same after the refreshments, although you could begin to sense that the visitors had the necessary quality to prevail.

Robertson had a deflected shot hacked away from near the line and then, just beyond the hour mark, a golden chance to take the lead was spurned.

It was Robertson again, who having got to the by-line, played a perfect pull-back for Shrimpton. The midfielder looked certain to score but, as he pulled the trigger, a cruel deviation off the pitch meant the ball flashed over the target.

Not much longer to wait though before the hardy band of travelling fans were on their feet to celebrate a quick-fire double from Brody Robertson.

Firstly, the livewire forward ghosted in to capitalise on confusion in the defence. Connell did well to parry the initial salvo but was helpless to prevent Robertson smashing in the rebound from close range.

Then, the Owls’ top-scorer was alert to seize on a misplaced clearance. In an instant, a defender was side-stepped and an unstoppable right-foot pile-driver found the bottom corner.

With the points under lock-and-key, the Clee rear-guard, once again excellently marshalled by Cooke & Middleton, set about preserving another clean sheet. This was achieved in relative comfort. Dunston tried their best but the superb team spirit that runs through the group ensured a shut-out.

Incredible – 13 away wins in 16 outings! Magnificent from everyone… well played.

In another stat, take out the Liversedge match, and we have conceded just 4 goals in 11 games since the turn of the year. Promotion form? Hopefully!!

Thanks to the fans that travelled. Two home fixtures to enjoy now, starting next weekend against Frickley – see you there.