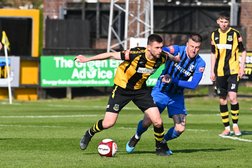 Clee finished the regular season in style, romping to a 4-0 win at mid-table Hebburn Town. A brace from Jon Oglesby plus strikes by Luke Lofts & Brody Robertson ensured that the Owls would enjoy home advantage against Stockton Town in the play-off semi-final.

With a minimum of a point required to secure 3rd place in the East Division, Dave Smith named an unchanged starting XI.

Pleasant conditions on a sunny afternoon in South Tyneside. There was a brisk breeze to cool the temperatures and the pitch was in excellent condition for late April.

Clee got the perfect start in the 4th minute. Jon Oglesby was alert to intercept a loose pass from keeper Foden and the winger curled the ball into the unguarded net.

The visitors were playing confidently and moving the ball around with pace. Therefore, it came as no real surprise when the lead was doubled.

After Allasan had flashed a drive wide for the Hornets, Luke Lofts jinked into the box at the other end, before delightfully finding the bottom corner with the outside of his boot.

The Owls nearly made the points completely safe just before the interval. Both goal-scorers were involved in the action. After Oglesby hit the woodwork, Lofts hooked the wrong side of the upright.

Stopper Jackson made a good hold from Allasan early in the second period, and only a short time longer elapsed before Clee entered the comfort zone with a third.

Hebburn, who to their credit continued to try to keep the ball on the deck, lacked penetration to really trouble the defensive unit, who limbered up for the knock-outs by registering another clean sheet.

The final goal perhaps fittingly fell to Brody Robertson. It was good one as well. A raking cross-field 40-yard ball by Vernon picked out Oglesby. The man-of-the-match deftly controlled and squared right into the path of the top-scorer, who gleefully slotted in his 19th of the campaign.

Here we go! A great “warm-up” triumph yesterday – it couldn’t have gone much better to be fair.

What a match in prospect against Stockton – the place should be rocking. The formbook would seem to slightly favour us. However, it is going to be totally “on the night”. If we produce somewhere near our best, we can do it.

A reminder that the winners will progress to the Final next Saturday. It will either be away to Marske or at home to Shildon. Also, if the game is level after 90 minutes, extra-time will be played and if necessary penalties taken.

Finally, many congratulations to the players & management for securing 3rd place in a tough, tough division.