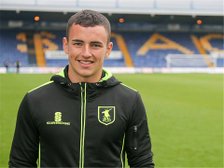 NEW SIGNING ALERT - The Gaffer has got his man! The club are delighted to announce the signing of Lewis Collins on a 2 year deal - The Gaffer commented 'This is the one we wanted, Lewis is an exciting young talent and we couldn't be happier' Lewis signs from Mansfield Town.

The 20-year-old from Grimsby is a central midfielder, possessing an extensive range of passing which can unlock the opposition defence effortlessly.

Having made his mark for the Grimsby Town academy since the age of 11, he was signed by Championship outfit Reading in 2013. Collins honed his skills further with a six-month loan spell to Hampshire-based Farnborough FC, and subsequently signed a one-year pro deal with the Royals in 2015.

He then made his way to Mansfield after his deal expired in the summer of 2016.

Lewis has featured in their u23's and on loan at Hednesford and North Ferriby last season earning rave reviews and man of the match performances.

Welcome to the club Lewis!