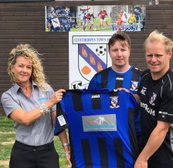 Great away win for the A Team

Saturdays game saw the ‘A’ Team sponsored by Oasis Health club travel to North Somercotes on the back of a good 3-2 win last week against Immingham Town Development .

The team had 5 changes in and again gave opportunities to some of the Under 18’s . A bright start by the Owls saw Jacob Smith open the scoring from an effort outside the box after good build up , we also hit the woodwork 25 mins in and created a couple of chances as the pace and movement of Parker and Overend were causing Somercotes problems backed up by Hudson and Arslan on the wings .

Smith joined in the attacks with Osbourne pulling the strings in the middle of the park and taking control of the game . Crawford and Cordingley at full back were solid in defence and supporting the wide men with Atkin and Wingate marshalling the back 4 in front of debutant Dylan Leak .

The Owls went in 1 up at the break but 10 minutes into the 2nd half we doubled our lead after great work from Hudson and cross saw it find Parker 10 yards out who slotted home . 70 minutes in Somercotes pulled a goal back but 5 minutes later Overend restored the 2 goal lead with a smart finish on the angle after being put through by Parker . Ten minutes from time Overend scored again after substitute Woods won the ball back with Overend finding the bottom corner to finish the game in style with a 4-1 win to send the Owls top .

The average age of the squad was only 20 years old which is a great sign for the future , the more experienced lads are really helping the young lads in the development of the side .
We are in Cup action Saturday 14th OctoberAway vs North Cotes with a 2:30 ko