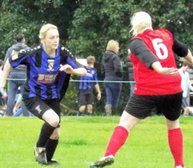 Ossett Ladies Left in a Fuss

Sunday afternoon saw Cleethorpes Town Ladies’ latest league outing, at home against sister club of Evo Stick side Ossett Albion. On a warm autumn afternoon, The Owls were hoping to make up for last week’s disappointment of a 95th minute winner handed to their opponents by gaining the points to even up their record to 2-2 this season.

Lining up for the hosts was Hollie Francis, making her return in goal following last week’s unavoidable work shift. The back four included returning Gemma Pickett, making her first start for the club this season in captain Naomi Hardman’s absence. Becky Dent returned from a facial injury sustained in the season’s opener against Westella & Willerby and was joined by Beth French and youngster Eve Vickers.
Midfield was a four of Emma Smith, goal scorer for the under 18's in yesterday's win Saskia Rawbone, the lively Pariss Welsh and Claire Camburn, also making her first start this season following a niggly heel injury picked up in pre-season. Lottie Soar joined captain for the day Alyssa Fussey up front, in a different role to her usual left side.

The first minute of the match provided a huge chance for the Owls to take the lead when the home captain found herself in space in the box but caught the outside of the post with her left foot strike. The strength of the hosts was causing problems for the Ossett players who were caught on the ball by a lot of energy from Cleethorpes, and were looking dangerous going forward for the first ten minutes, though the quick strike force from West Yorkshire of Nicola Swift and Jenna Wraith had to be contained.

Emma Smith found herself free at the back post following a Lottie Soar cross on 10 minutes, and after facing away from the goal, chested the ball down and lifted it over her head and into the net for 1-0. However, three minutes later, the sharp Ossett striker became free after a long ball, running in behind the back four and finishing well to even the scoring for the day.

With the away side gaining confidence and knocking the ball around nicely by the middle of the half, Cleethorpes sat deeper and made it difficult for themselves to go and win the ball in midfield due to the enhanced gaps in there. Though with a rare corner in the middle twenty minutes of the half, Beth French lifted it into a dangerous area in the middle of the goal, striker Lottie Soar nodding in from around a yard out for the lead again.

With what was becoming a habit, Ossett returned the scoring within a few minutes with a sharp shot inside the box for 2-2 after 26 minutes. This was made 3-2 for the visitors with another run in behind at the stroke of half time, with Francis managing to get hands on the initial strike but the forward finishing at the second attempt.

At half time there were two changes for the hosts, with a straight swap down the right hand side, Aldrich and Wilkinson replacing Welsh and Vickers.

At 3-2 down, The Owls began the second half with a sense of urgency, returning to their initial plan of winning the ball in better areas of the pitch, but without testing the visiting ‘keeper and the score line stayed at 3-2. Though with Alyssa Fussey’s first of the afternoon, a deep cross that landed in the far top corner in the 64th minute, was the touch that the striped shirts needed to kick start them into the wonderful twenty minute performance that won The Owls the game.

With Cleethorpes taking the lead in the game with 15 minutes left, a fabulous through ball from youngster Louise Aldrich, making only her second competitive appearance for the side, sent Fussey on her way into a race with the onrushing goal keeper, who had swept up everything in her path so far in the game, however this time was different with the speedy captain nicking it away just before the keeper made it, rounded her and finished very well from a wide angle.

The rampant hosts were looking dangerous each time they were travelling forward, with a great confidence and midfielders Rawbone and Camburn supporting each attack, making it tough for the visitors to get out of their own half. Clee followed up this pressure with a further goal on the 81 minute mark, the excellent Saskia Rawbone jinking in and out of 2 tackles before sensibly squaring to Fussey, cutting inside and firing home to complete a wonderful second half hat trick.

Though Ossett offered a bit of a fight and a fluke goal in the final minutes, with a return ball flying high into the air and over the chanceless Francis into the top of the net for 5-4, the victory was all but secured with ten minutes left to bring the Owls their second home victory in a row.

Next week Cleethorpes Ladies travel to Brandsholme in Hull for their next game against Malet Lambert YC, who had a 6-1 victory over Grimsby Borough in a pre-season friendly. Here’s hoping the Ladies can push on from here and go on a run of results to push them towards the top end of the new league.