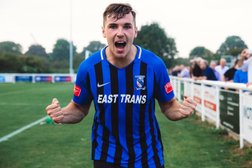 Clee surged to a 6th successive Northern Premier League victory with a 4-0 triumph at Pickering Town on Saturday afternoon. It was certainly a great result – the goals coming from Jordon Cooke, Tim Lowe, Loz McKay and Luke Lofts.

In team news, Josh Venney was out injured. However, Dave Smith was in the happy position of still having a wealth of talent at his disposal. The only change to the starting XI from Tuesday’s win saw Loz McKay coming in at left wing-back, with the versatile Sam Topliss moving into a more central position.

Dry conditions in North Yorkshire at kick-off and Clee quickly seized an important early initiative against the basement battlers. McMenemy rose to knock on a cross and Jordon Cooke (pictured in earlier action) smashed the ball into the roof of the net, to record his first for the club.

At this stage, the Owls threatened to overwhelm their hosts. However, Pickering showed good determination to make life as difficult as possible, with Keita and Holdsworth particularly lively.

Throughout the encounter though, the impression remained that the visitors always carried the greater threat in the final third of the park. McMenemy went close twice, hitting the side-netting and then glancing a teasing McKay cross wide of the mark.

It was McKay himself who had a good chance a couple of minutes before the interval. The ball appeared to bobble slightly at the moment of contact, and stopper Kelsey pawed it round the post.

The first-half was also notable for the amount of headers completed by the central defensive trio of Cooke, Donald and Walker. All were particularly commanding.

A second goal would ease any nerves and it duly arrived in the 56th minute.

Robertson held his run to spring the offside trap and raced to the by-line. Tim Lowe had quickly read the situation, covering 40-yards of ground in rapid fashion. A pinpoint delivery was perfect for the onrushing wing-back, who confidently found the bottom corner.

Pickering responded via Keita, but his fierce drive was deflected over Jackson’s crossbar. This was as close as the Owls came to conceding, and the icing on the cake was registering twice more in the closing quarter-of-an-hour.

Firstly, with 77 played, Loz McKay rifled a shot in from the edge of the box. Then, to complete the entertainment, Luke Lofts scored arguably the pick of the bunch. The substitute weaved through 2 or 3 challenges before drilling it beyond the keeper.

Lofts nearly added a fifth following a superb piece of skill. Nevertheless, at the final whistle, the players & management could rightly soak up the acclaim from the travelling support – it had been a job well done!

Americans call it the “big mo” and it is certainly building for us!

Momentum is very important in sport and no other side in the division is going to relish the prospect of facing the Owls. I’ve seen us play better to be fair but, after the early goal, I always felt that the 3 points would be heading back to North East Lincolnshire. A controlled performance, with some eye-catching goals.

Very pleased to see our first clean sheet of the NPL campaign as well – congratulations to Tom Jackson and our defensive trio, all of whom were excellent… well played.

After 9 points in a week, we return to the Myenergi Stadium on Saturday for the visit of Tadcaster Albion. Get down there to support the lads, they deserve it!