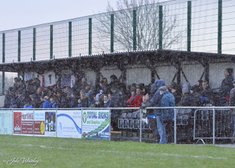 Under 23's shine at Harworth

Tuesday night our u23’s played their first pre season friendly in preparation for the Lincolnshire FA Under 23’s League against a very strong Harworth Colliery Reserve side .

Billed as Under 23’s our most senior player was only 18 years old and saw several lads making their first appearances at senior level including 5 who are 16 years of age , which bodes well for the future .

It took 5-10 minutes to settle into the game , which is understandable considering , with David Taylor in the Owls goal commanding his area . After a good bit of play down our left Danny Jewell came inside going past a couple of players before smashing a right footed shot past the Harworth keeper for 1-0 .

Jewell , Rhodes and Hudson pressed the Harworth defence well from the front backed up by Powles , Usher and Lawrence in the midfield . Bennett and Fisher flanked by Larn and Barrett at the back were solid as a unit .

Our second goal of the night was scored by Jewell again after working the full back he won the ball and slotted under the keeper for 2-0 before half time .

Stables , Hanks , Hyldon and Mursean were all introduced during the first half giving everyone the opportunity the impress and they all did .

The second half was as good as the first In terms of the work rate and how for a young side managed the game . It was as a result of more pressing Jewell was able to break play up and charge into the Harworth box before unselfishly setting Hanks up for a 3rd at the back box .

Very good nights work and great to see these lads step up when called upon . They’ll definitely be more opportunities for the lads and the whole u18’s group to progress through the pathway at the Club .

We’d like to thank Harworth Colliery FC and Chairman Jonathan Wilson for the game and superb Hospitality and also wish the Club the best for the forthcoming season .