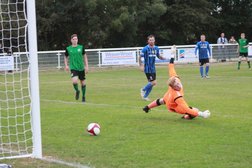 The New Linden witnessed its first competitive encounter as Scunthorpe United were represented by their Academy team in the Lincolnshire Senior Cup 1st Round.

As expected from a League One academy set-up, the young Iron started confidently and had clearly been coached to keep the ball on the floor. The opening period was fairly even, with Robertson’s pace proving the biggest threat for the Owls. Taylor and Batty also did well as the half wore on.

However, somewhat against the run of play, Scunthorpe took the lead in the 34th minute. A patient move saw the ball fall to the feet of Joe Busby. The midfielder produced an exquisite curling right-footer beyond the outstretched hand of Birch into the corner of the net.

Captain Flett very nearly equalised a couple of minutes before the break after he drew a foul around 22 yards out. His bending free-kick beat the wall but finished in the side-netting, as the Owls trailed at the interval.

It did not take the home side long to turn the tie on its head. Firstly, on 57 minutes, last season’s 25-goal man North cleverly looped a header in from 10 yards. Soon afterwards, strike partner Robertson slotted home underneath away stopper Sam Riches, after a defender had been caught in possession.

Scunthorpe continued to try to pass their way out of trouble but several times this led to chances for the Owls to put the game out of reach.
The Iron were indebted to Riches, who made a number of excellent saves throughout the 90 minutes and looks a good prospect.

Clee suffered a blow with 12 minutes left on the watch when North was withdrawn as a precaution after taking a knock, which meant finishing the tie with 10 men.

This did not prove a problem though, as the away youngsters failed to seriously trouble Birch. The final whistle sounded and the Owls had confidently moved into the last 8, where a home match against Grimsby Town awaits.

A fairly comfortable victory and, more importantly, game time for all 18 players involved. Just a progression of fitness at this stage, and with 5 weeks still to go before the Evostik starts, I would imagine the management being pretty happy with their squad.

The Mariners at home in the next round and, due to Lincs FA rules, this is likely to take place in the next 10 days or so. Keep an eye on social media for the details.

Next up on Saturday (14th – 3pm) at New Linden, old rivals Worksop Town pay a visit. Admission is £5 / £3 and, with good weather once again forecast, let’s get a decent crowd down to support the lads!