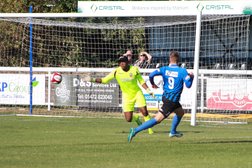 After the thrilling 5-0 rout of Bamber Bridge, it was more knock-out football at New Linden. This time Mossley were the visitors for an FA Trophy Extra Preliminary Round encounter.

It came as no surprise that the management team went for a very similar starting XI to Tuesday’s emphatic FA Cup win, as follows:

The Owls got off to an absolute flyer and opened the scoring with barely 90 seconds gone. A long through ball from Oli Donald found Josh Batty, who was operating as an orthodox striker with Scott Vernon absent injured. He advanced into the box through the inside right channel before easily beating keeper Musanga with a low shot.

Clee were dominant during the first 20 minutes and, after forcing several corners, Donald went within a yard of doubling the lead with a header. Mossley were struggling to find any rhythm but Dylan Parker did well to claw away a goalbound effort when they did finally threaten. This proved a pivotal moment as shortly afterwards the Owls grabbed a second.

A simply delightful team moved swept the length of the field and, with the away defence in tatters, Jon Oglesby had an ocean of space on the left 15 yards out. The in-form winger, fresh from his destruction of Bamber Bridge, steadied himself and easily beat Musanga.

The scoreline was, at this stage, a fair reflection but Mossley came more into the tie as we moved past the half-hour.

Luck was with the Owls on 33 minutes when the ball hit Donald’s hand near the byline. The referee had a good look but decided it was accidental. Then, the visitors’ best move of the game ended with a fierce effort being deflected for the corner.

Nothing more than a couple of half-chances during the remainder of the first 45, as Clee headed for their dressing room in a comfortable position.

In an action replay of the opening, an early goal from Josh Batty put the game well beyond the reach of the Lilywhites. This time the striker had a ball threaded through to him on the inside left. Looking up to assess the situation, he drew Musanga before rounding him and coolly slotting home from a narrow angle.

With the 3-goal cushion, Clee were happy enough as play drifted through its next phase. Mossley did not possess enough to worry the home defence, with the partnership of the evergreen Bloomer and Donald snuffing out away attacks without difficulty.

The sun-drenched crowd were treated to a mazy run from Robertson but a defender did well to block his cross. The Owls’ management team opted to use all three subs as we entered the final 15 minutes. A welcome return from injury for Danny North, who entered the action along with Luke Aldrich and Loz McKay. Batty, Robertson and Disley respectively were the players to give way.

Unfortunately, Clee could not protect a deserved clean sheet. In the 85th minute, Mossley put together some nice play and substitute Ben Halfacre deftly flicked the ball beyond Parkin.

This, however, did not herald an unlikely comeback, as the Owls easily saw out time to advance to the next round and a date near Manchester at Radcliffe.

A routine win would sum it up!

Sitting 6th in the West division, I personally had expected much more from Mossley. For whatever reason, they were easily brushed aside. This is not to detract from the Owls, who played well in parts. These last two Cup wins should hopefully boost everyone’s confidence ahead of our return to League action.

Our 2-week absence has seen us slide to the bottom of the table. Obviously, with games in hand on all our rivals, we can quickly make up for our poor start. With potentially four home Evostik games on the bounce at New Linden, we really need a bumper haul of points.

League, Cup and Trophy encounters are ahead and all support will be well appreciated through the hectic month of October. Fixtures are outlined below.

As you can see, a few ifs and buts, so keep your eye on social media and the website for all the details.