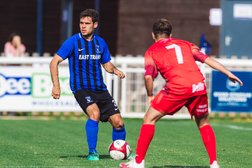 NCEL outfit AFC Mansfield caused a shock on Saturday afternoon at The Myenergi Stadium by claiming a 1-0 win. Lynton Karkach headed come the only goal of the tie as early as the 4th minute.

No surprise that after last week’s superb 5-0 demolition of Gainsborough Trinity, Dave Smith decided to opt for the same starting XI.

Expectation was high amongst the home faithful, but the favourites got a rude awakening as the Bulls claimed the initiative in the first meaningful action. Lynton Karkach headed the underdogs ahead, to the delight of the travelling fans from Nottinghamshire.

There was almost an immediate response though. Central defender Walker was left cursing his luck as his header hit the inside of the post and went to safety.

This set the tone for a highly frustrating day. Clee had the bulk of possession and chances, but Mansfield defended gamely throughout, with keeper Warhurst outstanding.

With the break approaching, there were huge appeals for a penalty. Vernon was crudely tripped right on the edge of the box. However, the assistant ruled that it was a free-kick. Oglesby curled the award delightfully over the wall, but Warhurst made a notable one-handed save at full stretch.

The action after the half-time interval was largely one-way traffic. Nevertheless, for all their endeavour, the Owls could not find the leveller.

Bateson shot a yard off-target and then Jacklin somehow headed wide from no more than 3-yards out, with the goal at his mercy.

Mansfield sensed they could claim a slice of Cup glory and resisted stoutly. Nevertheless, Clee continued to press and a golden chance to take the match to penalties arrived in the first minute of added time. Sub Donald ghosted into plenty of space but pulled his effort wide of the far post.

We start our Pitching In Northern Premier League South-East Division campaign at home next Saturday. Ilkeston Town are the visitors and kick-off is 3pm.