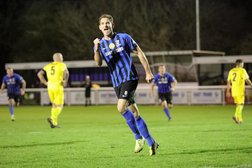 A late penalty converted by Scott Vernon saw the Owls home to an important 2-1 win against promotion rivals Belper Town on Saturday afternoon. Nathan Curtis gave the Nailers the advantage before Josh Lacey bulleted in a header to level. It looked like being a draw until Clee capitalised on a handball in the 84th minute.

Dave Smith was looking for a response after last week’s defeat and the manager made three changes. Oli Donald replaced Paul Walker in defence, with Conor Marshall anchoring the midfield. The final alteration was Brody Robertson coming in at the expense of Jon Oglesby.

The clash of two of the top five got underway in pleasant conditions and both teams worked their way into the encounter through the early stages.

Marshall shot over for the Owls in the 4th minute following a fluent build-up. Belper responded by forcing a good save from Richardson and the visitors also hit the top of the crossbar in an even opening phase.

Half-chances were generally the order of the day but Clee went agonisingly close to opening the scoring with 24 played. Captain Flett floated in a delightful cross and Vernon’s header grazed the upright. As play switched to the other end though, the Nailers seized the initiative. Stopper Richardson punched a corner against colleague Topliss and Nathan Curtis tapped home from a yard out.

Despite the setback, Clee battled back and levelled within 7 minutes. Josh Lacey rose on the 6-yard line to power in an in-swinging left-wing corner from Flett.

Buoyed by restoring parity, the homesters almost grabbed a second shortly afterwards. Topliss and Collins combined superbly on the right to set-up Vernon. The top-scorer could not quite convert, with the ball ending up on the roof of the net.

The second period followed a similar pattern to the first, with two talented outfits battling to gain control. Belper were dangerous from set-pieces but, in open play, the Owls were the more inventive.

Donald twice came within inches of scoring the vital third of the day. The big defender could only hold his head in frustration as on each occasion the ball drifted off-target.

As time wore on, frustration was beginning to grow that Clee’s overall play was not going to secure the full reward. The management decided on two substitutions. Brody Robertson and Lewis Collins were withdrawn. The replacements summoned from the bench were Jon Oglesby and Josh Batty.

The Owls continued to press and, in the 84th minute, the decisive moment arrived. A fierce drive was charged down by the sliding Kozluk, but the defender’s hands were raised. As contact was made, the referee had no hesitation in pointing to the spot. Despite protests, the official was adamant and Scott Vernon (pictured) was waiting to coolly slot the kick beyond Musselwhite’s grasp.

Belper had to now throw caution to the wind and commit everyone, including their goalkeeper, forward in the four additional minutes. However, the Owls’ defence stood tall to easily see off the threat and gather the merited victory.

Bouncebackability!! I think Iain Dowie coined the phrase and we showed it in abundance yesterday. After last week’s stinker at Worksop, everyone rolled up their sleeves and gained a deserved, and vital, win.

It was close and Belper are clearly a very decent side, but most observers inside Linden would reflect that the team with the greater craft and ideas eventually won the day. Delighted for Dave Smith that a personally difficult week ended on a high note.

Only 8 points separate the top eight and it looks like being a thrilling few months. Leaders Stamford away next Saturday – a mouth-watering prospect. We can travel south full of confidence and, as always, all support will be much appreciated.

My man-of-the-match is Josh Lacey. A committed defensive display and got forward well, all topped off by a rare(!!) goal – well played! Earning a mention to is Conor Marshall, who stepped in to his defensive midfield role superbly.