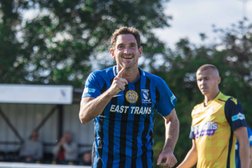 A header from top-scorer Scott Vernon in the final play of the game earned a precious 2-1 win at play-off rivals Belper Town on Saturday afternoon. Josh Lacey had given the Owls the advantage early in the second-half, before Danny South equalised for the Nailers.

From last time out against Spalding, Scott Vernon replaced Ross Hannah. In the other change, Dave Smith opted for Conor Marshall in a holding midfield role, with Curtis Bateson giving way. There was a welcome sight on the bench. Both Liam Dickens and Josh Batty were declared fit, after working hard to battle back from long-term injuries.

It was a pleasant enough early Spring day in Derbyshire at kick-off but, as has so often been the case recently, there was a strong breeze for the players to contend with.

Clee had the best of the opening minutes and Vernon twice went close. Firstly, stopper Musselwhite produced a reflex save to thwart the big striker and then, following an ideal ball in by Lacey, the Belper keeper was again on top form to block a close-range effort.

After their sluggish start, Belper came into the encounter and had a goal correctly ruled out for offside in the 25th minute. Then, Richardson was required to confidently parry away a fierce drive.

In truth, the opening 45 had seen the sides largely cancel each other out and both defensive units would have been pleased with their work.

The feeling amongst the 300+ crowd was that the vital encounter desperately needed a spark to fire the imagination and the fans did not have long to wait for the breakthrough.

In the 53rd minute, Josh Lacey galloped free along the left-flank. There did not appear to be any imminent danger, but the full-back’s dipping cross-shot seemed to surprise Musselwhite and flew over the keeper into the net.

Perhaps an element of fortune. However, those following the Owls were not bothered about that and the visitors continued to maintain their discipline to frustrate Belper. In particular, Walker & Donald were a commanding presence in central defence and dealt admirably with numerous high balls from the hosts.

In fact, despite the Nailers applying some pressure, it was the Owls who went close to doubling the advantage, a header from captain Flett was smartly turned away by Musselwhite. A couple of substitutions followed. Winfarrah and Marshall were withdrawn to be replaced by Bateson and Dickens respectively.

Just when it seemed the Owls would see the day out, Belper equalised in the 79th minute. A corner from the left was floated into the danger-zone and Danny South used his stature to impressive effect to rise highest amongst a mass of bodies, directing an unstoppable header into the corner.

Few inside the Raygar Stadium would have argued if the combatants had finished level but, after Batty replaced Oglesby in Clee’s final change, there was to be a dramatic finale.

The referee had indicated a minimum of 4 added minutes and in the final 10 seconds of this allocation, a free-kick was awarded 35-yards or so out. After a slight delay to allow the Owls to press men into the box, up stepped Flett to undertake a teasing delivery. The ball sailed towards the far post and Scott Vernon got the better of his marker to guide a header home, possibly via a slight deflection.

Belper were left in vain appealing for an infringement and the final whistle blew as soon as the restart had taken place, to signal a terrific battling performance that had gone a long way to securing a top 3 finish.

3 points!! Superb resolution from the lads to keep going into the 94th minute and beyond!

I was particularly delighted to see Liam Dickens & Josh Batty return to the field. They have both been working hard behind the scenes to get fully fit and play their part in the run-in. Well done to physios Chace Homer & Mario Augusta as well.

Thanks as always to the fans who travelled and a tricky man-of-the-match call. Personally, for me, just Paul Walker who, alongside colleague Oli Donald, must have headed the ball a million times!!

Cup Final on Tuesday! Get yourself along, it will be a great night for the Club. Pleased to say that we now have some extra coach capacity for our supporters. Just contact me via social media or on 07470 223939.