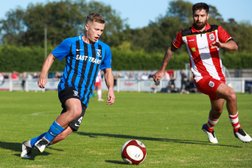 Ilkeston Town claimed a narrow 3-2 victory in the first Pitching In Northern Premier League fixture of the campaign on Saturday afternoon at a sun-kissed Myenergi Stadium. Harry Middleton and Scott Vernon were on-target for the Owls.

It was a delightful late Summer’s day as the action got underway before a capacity crowd of 400.

The opening phase was pretty even, before the Robins seized the initiative in the 14th minute. Goodson found Nathan Watson, who shot into the corner of the net.

After this setback, Clee tried to get into their rhythm but Ilkeston continued to look the more fluent at this stage of the contest. Keeper Richardson was at his athletic best to tip away a fierce dipping 25-yarder by Thomas.

The Owls did have their moments as well though, with Bateson shooting a yard or so wide and also having an appeal for a spot-kick waved away by the referee. Then, visiting stopper Durrant slightly fumbled and he would have been relieved to see the resulting half-chance sail over the bar.

Clee emerged from the dressing room with much more fire in their collective bellies and drew level within 90 seconds. A clever short corner was stroked home from the edge of the area, via the inside of the upright, by Harry Middleton.

This was the cue for the Owls to enjoy their best period, as a turnaround was threatened. Nevertheless, Ilkeston were in no mood to buckle and, following a superb one-handed stop by Richardson, they regained the advantage shortly before the hour. Goodson was again the provider and Alex Troke made no mistake.

Ilkeston had a goal disallowed for offside but eased into the comfort zone with 72 minutes elapsed. Zak Goodson, who had caught the eye all day, burst clear and calmly rolled the ball beyond Richardson, to the delight of the large following from Derbyshire.

The Owls now faced an uphill struggle to salvage a result but, to their credit, continued to battle away. This spirit was rewarded in the 2nd minute of added time, as Scott Vernon thumped home a penalty, following a clumsy tackle.

With the clock still ticking, the home faithful sensed the possibility of an unlikely draw. However, Ilkeston saw out the remaining seconds to inflict a first-day defeat on the Owls for the first time in 5 years.

We start our Pitching In Northern Premier League South-East Division away campaign at Glossop North End next Saturday. Hope to see you there!